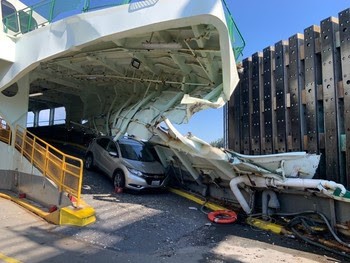 Washington State Ferries is working with the Coast Guard and the National Transportation Safety Board in investigating the cause of this morning's hard landing at Fauntleroy. WSF does not know yet how this incident will affect service across the  system, but will keep the public informed of any changes.

The ferry Cathlamet had a hard landing Fauntleroy Thursday, July 28, 2022 causing significant damage to the vessel and an offshore dolphin at the terminal. Fauntleroy service was suspended until later that day once the ferry was moved away from the terminal. No one was seriously hurt.