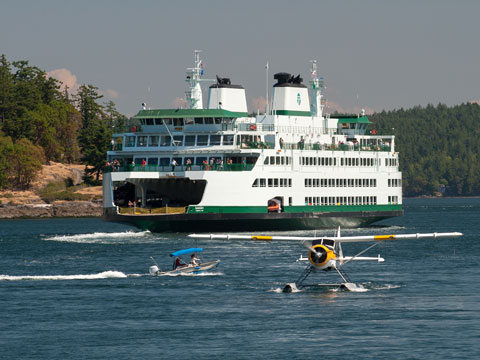 WSF reported there were 45 cancellations of San Juan Islands route sailings in the span of two weeks – which falls 3% short of their goal of 99% reliability. Attendees discussed ways to be more efficient in notifying riders of cancellations and working together to ensure islanders have enough time to make other arrangements. The importance of the interisland route was emphasized.

“These cancellations affect working families, school children, government operations, social services, sheriff operations, and more,” said councilmember Wolf. “It impacts our ability to do business as a community when small trades people can lose 20% of their income for a week when the interisland is cancelled.”

A committee consisting of elected officials and local chambers of commerce is one proposed solution that might support the San Juan Islands and Anacortes Ferry Advisory Committees.

WSF anticipates that their increased focus on recruitment and employee education will bring relief to the system by the summer of 2023. They expect less cancellations due to staffing shortages.

Earlier this year, WSF created two new programs that encourage current employees to take the necessary courses and exams to obtain a mates’ credential. Over the next 18 months, they expect more than 40 to complete all the training and credentials necessary to work as mates – which will support future system stability. They’ll be working with Governor Inslee and the legislature to make these programs permanent.

“We’re so grateful to Rep. Lekanoff for organizing this meeting because we were able to give folks a clearer understanding of the importance of the interisland run,” said councilmember Cindy Wolf.