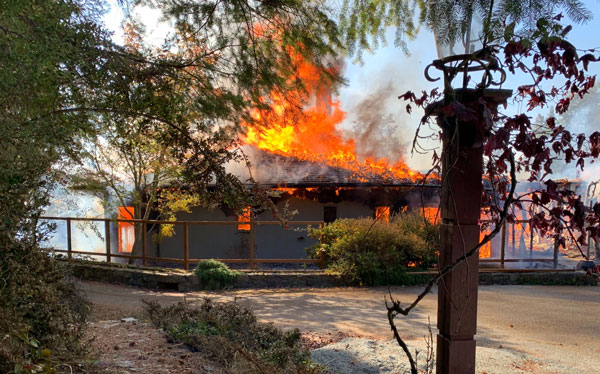 A waterfront home in Deer Harbor was fully engulfed in flames when Orcas Island Fire and Rescue responded at  3:27 p.m.  Friday, September 6, 2019.

“The heat was incredibly intense,” shared Firefighter Ben Luna, who was first on scene. “It was completely involved.”

With confirmation of nobody inside the structure located in the 6300 block of Deer Harbor Road, crews initiated a defensive attack – fighting the blaze from the exterior only, with a focus on protecting neighboring exposures and ensuring life safety. 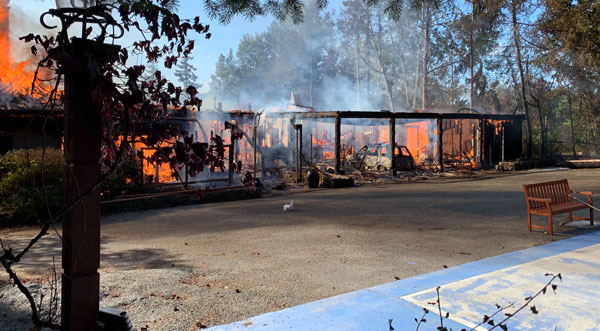 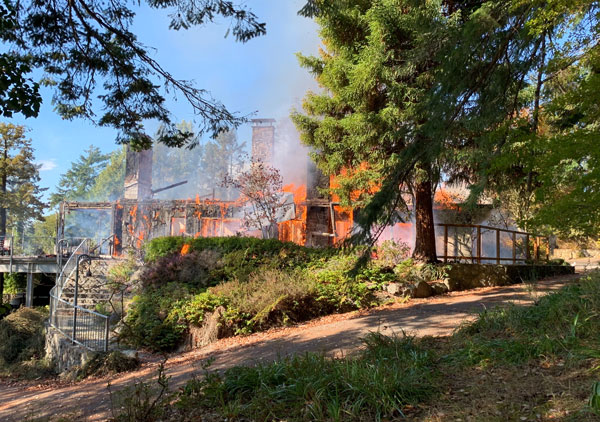 Due to the power of the heat and flames, crews were unable to complete an initial 360-degree assessment of the property. Battalion Chief Patrick Shepler quickly called for assistance from San Juan Fire, who sent a compliment of firefighters aboard the fireboat Sentinel. San Juan crews were able to moor at the resident dock and access the backside of the property, drafting water from the harbor and keeping the flames from reaching a 500-gallon propane tank. A Department of Natural Resources wildland fire crew returning from a controlled burn on an outer island also provided support when a wildland fire broke out due to the blaze. 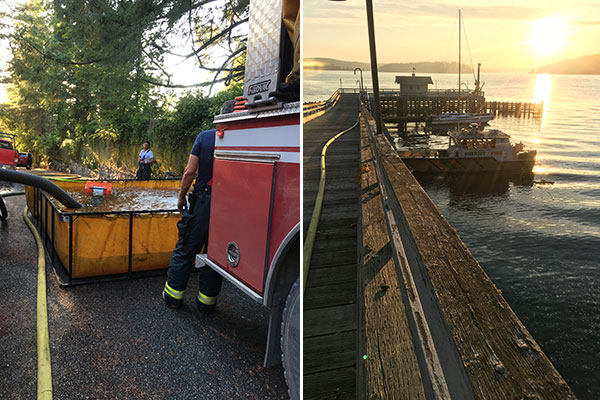 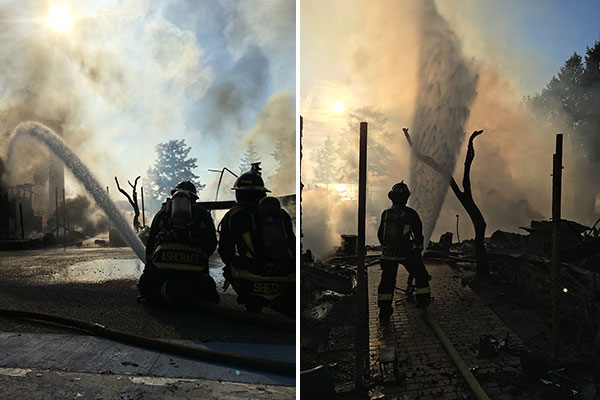 Over 75,000 gallons of water were put on the fire, not including water applied by the Sentinel. One of the unique issues faced by various areas of the rural island is the lack of established water systems containing fire hydrants. Without hydrants in the area, apparatus completed what is known as a “water shuttle”. OIFR water tenders took turns drafting water from a local pond and transporting to the scene, where a drop tank was set up. Crews on scene were able to draft from the drop tank, keeping sufficient water flow on the fire.

The owner, who was home at the time, is stunned at how quickly the inferno spread. “It’s difficult to process,” he reflected, “At 2:30 this afternoon I was walking around my house. Now everything is just gone.” As soon as he noticed the fire, he grabbed a hose and attempted to put it out. “I quickly realized it was not going to work.” So, he called 911 and ran to his neighbor’s homes and warned them to get out.

The cause of the fire is unknown at this time. Crews remained on scene through the night to continue flowing water as the fire burned.

OIFR sends out a big thank you to San Juan Island Fire for their assistance, Orcas Power and Light Cooperative for their speedy response to cut the power, the DNR crew for detouring to lend a hand, the OIFR Auxiliary for providing rehab nourishment for crews on scene, and Deer Harbor Inn for delivering dinner for crews arriving back at the station.

OIFR would like to remind everyone to keep smoke detectors working – change the batteries every 6 months – and be sure to have fire extinguishers throughout your home. /p>