Readers had some questions about two fires that occurred last week on San Juan Island. 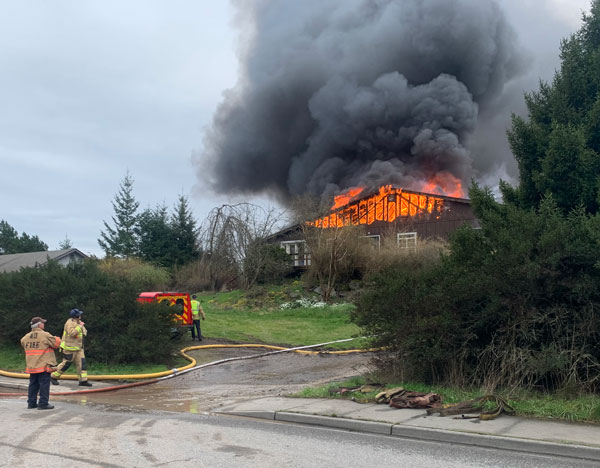 Friday, March 26, 2022, there was a fully-involved structure fire in the False Bay area of the island. Some people  have been concerned that ammunition has been stored in the structure. According to San Juan Island Fire Chief Norvin Collins, the explosion in the shop building was most likely related to welding supplies, likely an oxygen canister. He said there was no ammunition.

The cause of the fire is unknown and due to the extent of the damage, likely won't be determined. No one - either citizens or firefighters - was injured in the incident. Two engines and two tenders responded along with a dozen firefighters.

Saturday, March 27, 2022 a planned fire took place on Guard Street in Friday Harbor. SJIF&R was contacted by the owner of the residence about possibly burning it. After an inspection that followed local, state and federal guidelines, the department decided to use it as the final part of the Fire Training Academy. All hazardous materials were removed and on-site safety inspections occurred before the training session.

If you want to get a structure on the list, contact the SJIF&R at 360.378.5334. Most of the properties/items offered are not accepted. Assistant Chief Monin checks out the requests.

The burn allowed San Juan, Lopez and Orcas Island fire departments to save time and money since they did not have to send people to the mainland for live fire training. With personnel from all three departments attending, more experience  working together was gained.

Chief Collins noted that one of the big changes from previous joint training, was the use of the air bottle systems. A federal grant provided the funds so all three departments are on the same system. It eliminated the need to fill and swap out three different types of bottles.

Some people were upset about the idea of a fire in the urban area. It has been done this way in the islands for decades.