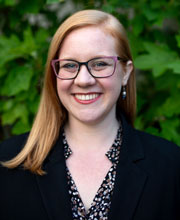 Carolyn Jewett said,"When I first thought about going to law school I thought that I'd want to become a judge one day." That goal may be accomplished much sooner than she originally planned if voters choose her as the next San Juan County District Court Judge. The retirement of Judge Stewart Andrew created the opportunity.

Her more immediate goal after law school was working as a prosecutor. Jewett grew up in Bremerton and knew she wanted to work in Washington. When she arrived in Friday Harbor in 2015 to interview for her current job as San Juan County Deputy Prosecutor, she had never been to the San Juan Islands before.

"I got kind of lucky," she said. Her luck continued as she was able to find a reasonable one bedroom place to live.

While in law school at the University of Washington, Jewett worked as a Rule Nine intern in the King County prosecuting attorney's office. Rule Nine authorizes the supervised practice of law by qualified law students, enrolled law clerks, and recent graduates of approved law schools.

Jewett says she finds District Court appealing "because the crimes are less serious and there is more opportunity for positive outcomes." Since the crimes are misdemeanors, "it's easier for people to make amends."

"I really like that about district court, where you have those opportunities and you could have success stories... And also it's pretty fast paced. I mean the cases are shorter and smaller so they may move quickly and so you are never doing one thing for very long."

Asked about the idea that she would need to recuse herself quite often in her first year as judge, she said. "I don't see it as very different from what any attorney who is practicing in the county would go through if they were elected." She noted the speed with which cases go through District Court. "I think really after the first few months it will be a dramatic drop off in terms of that being an issue...It certainly won't be an ongoing issue for very long."

Jewett has never acted as a Pro Tem Judge in District Court. She was asked if she sees this lack of experience as a problem. She said, "No, I think it's something that ultimately isn't determinative in terms of an issue for the judge. The more experience you can get before taking the bench the better, but experience as a pro tem judge does not necessarily mean that that person is going to be a good full time judge."

"I bring a lot of different experiences to the table or to the bench. I come from a working class family, I talked a little bit about that at the forum. I think that's a bit of a unique perspective for a judge. And I think that's one  that matters in District Court because a lot of people that come to District Court are low income and that's really common especially for drug and driving while suspended cases . A lot of times it has to do with combination of lack of money to pay fines and then other things going on in their lives. They don't stay on top of things and just kind of spirals from there. I'm also a woman. It's an experience that we've seen it's important to have that represented on the bench as well. I also have work experience, my trial experience, I have significant trial experience in district court." She also has some experience in Superior Court as she has filled in for the felony prosecutor at times.

She noted that neither candidate has ever had the experience of being a defendant. "It's one of those things that experience is important, but also so is being able to understand or listen to and appreciate other experiences."

Jewett has been working on the task force led by Judge Kathryn Loring to create a Therapeutic Drug Court. "Originally it was thought that maybe the drug court would include District Court cases and it's looking like at least at the beginning it'll be Superior Court cases...We're starting out that way  for logistical reasons and practical reasons," she said.

As for other ideas about dealing with drug abuse in the islands, Jewett said, "If there were any easy answers we'd have found them already... The important thing that has been emerging from the most recent discussions about the problem is appreciating the public health crisis aspect of it. That  is important. And that's something that's going to take coordination and cooperation from multiple different aspects of government to tackle something like that."

"I do research very often. I'm always having to update myself on changes in law and look up new interesting legal arguments so I really enjoy doing the research and that's a big part of what the judge does," she said.

"And I was talking to these two biologists who had been working in Alaska and they were talking about how beautiful it was and they mention that the problem is in  Alaska the ecosystems are so vast that you feel insignificant. And they said that they like moving to the San Juans because ecosystems are smaller and you feel like you can make an impact. And it's the same with  people that you know when you live in a big city it sometimes feels insignificant, anything you can do make change. And it's not insignificant. But here it's really,  people just get an idea and do it.  And there's people making an impact in the community every day. And you don't have to be anything special to do it. And that's something that's really really cool . So I feel like  this is somewhere where I can make a positive impact and I can contribute my time to the community and feel like I'm really actually making a difference."

Jewett is endorsed by two groups the San Juan County Democrats and the Orcas Women's Coalition and by numerous individuals. You can see all of her endorsements and more information about her on her website http://electcarolynjewett.com/

More in this category: « Brandli would like to be the next District Court Judge Krebs wants to continue working with his new team of Sheriff deputies »