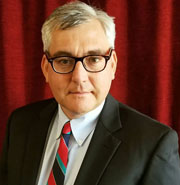 Asked why voters should choose him as the next San Juan County Prosecutor when he has filed several lawsuits on behalf of clients against the county, Nick Power responds, "Because I know where the problems are."

Power has won settlements on behalf of former county employees including one for $350,000. A current case involving a Public Information Request is being briefed for the state Supreme Court. If the court accepts the case, Power will be able to bypass the Court of Appeals. He says the cases he has lost have been 5-4 decisions.

Power would prioritize combating drug abuse if he is elected as Prosecutor. "Drugs have gotten harder, the economy has gotten harder," he said. The percentage of students on the free or reduced lunch program has increased from 23 percent to 50 percent in the past 10 years, according to Power.

"We can make this place cleaner without much effort," he said. "There is no reason we should cede territory...No one is going to shut down drug abuse completely, but let's at least keep it out."

Power is in favor of the proposed Therapeutic Drug Court. "Drug abuse is a huge problem with the islands' feast or famine economics, long winters and isolation," he said. The one size fits all approach to combating drug abuse doesn't work. The county needs to provide mental health access, he said.

Asked if he foresees problems managing the Prosecuting Attorney's 11-person office, Power said he works on teams of attorneys greater than that. "People who have worked with me find me fun to work with and collegial," he said. He would be looking at making as few staff changes as possible.

He has done a lot of work representing unions and by and large his interests have been with the union workers.

You can read more about Nick Power on his website http://www.nickpowerattorney.com/

More in this category: « Gaylord running for 7th term as county Prosecutor Some ballots cast, others still on the way to voters' mailboxes »