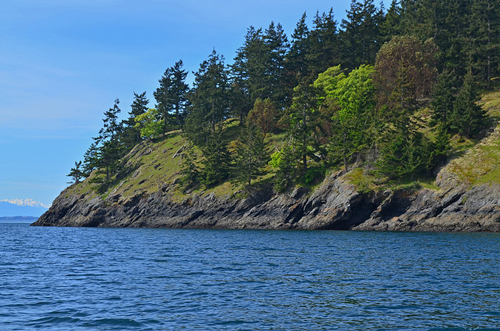 Part of the president's vision of more inclusive national parks and lands across the country, the memorandum advised agencies to make parks more accessible to Americans of all colors and creeds. Maite Arce, president and chief executive of the Hispanic Access Foundation, said her group is working to make all Americans feel welcome on lands owned by the public.

"We continue to build on President Obama's legacy," Arce said, "to ensure that the public-lands protection is strengthened, the stewards of these lands are reflecting the diversity of our nation, and all Americans can feel a sense of ownership and pride in their contribution for generations to come."

Under the Antiquities Act, Obama expanded national monuments in California and Oregon and named three civil rights-era monuments in the South.

Carolyn Finney, author of "Black Faces, White Spaces" and a member of the National Park System Advisory Board, said Obama perhaps is the first president to talk explicitly about diversity in regard to public lands, and this memorandum shows his commitment to it.

"The Presidential Memorandum for me," she said, "is, you've got the highest office in the land actually saying, 'Look, we think this is really important, so we're going to put this out there so that, when the agencies need something to refer to, they can see that this is serious.' "

It remains unclear what will happen to Obama's legacy on public lands once he leaves office. His use of the Antiquities Act, which he used to name San Juan Islands National Monument in 2013, has been opposed by Interior secretary nominee Ryan Zinke in the past. Arce said her group is part of a coalition dedicated to making 'the next 100 years' in national parks a reflection of America's diversity.

"Even with President Obama's amazing work and his legacy, there's so much more work to be done," she said, "and the new administration will absolutely be hearing from The Next 100 partners to ensure that we move forward."

Today, I am designating new national monuments that preserve critical chapters of our country’s history, from the Civil War to the civil rights movement. These monuments preserve the vibrant history of the Reconstruction Era and its role in redefining freedom. They tell the important stories of the citizens who helped launch the civil rights movement in Birmingham and the Freedom Riders whose bravery raised national awareness of segregation and violence. These stories are part of our shared history. From designating Stonewall National Monument, our country’s first national monument honoring the LGBT movement, to recognizing the movement for women’s equality through the Belmont-Paul Women’s Equality National Monument, I have sought to build a more inclusive National Park System and ensure that our national parks, monuments and public lands are fully reflective of our nation’s diverse history and culture.

I am also expanding existing areas for some of our country’s treasured and historic natural resources in Oregon and California today, including stretches of California’s scenic coast and unique wildlife habitat in rugged mountain ranges and forests in Oregon and California. Over the last 8 years, I have sought to work with local communities, Tribal governments, businesses, sportsmen, members of Congress and others to protect the most important public lands for the benefit of future generations. Today’s actions will help ensure that more of our country’s history will be preserved and celebrated, and that more of our outdoors will be protected for all to experience and enjoy.

In celebration of Martin Luther King Jr. Day, today, President Obama is designating three new national monuments honoring our country’s civil rights history and taking new steps to promote diversity in our national parks and other public lands. Building on the Administration’s commitment to protecting places that are culturally and historically significant and that reflect the story of all Americans, today’s designations will protect historic sites in Alabama and South Carolina that played an important role in American history stretching from the Civil War to the civil rights movement.

Birmingham Civil Rights National Monument: The Birmingham Civil Rights National Monument will protect the historic A.G. Gaston Motel in Birmingham, Alabama, which served at one point as the headquarters for the civil rights campaign led by Dr. Martin Luther King Jr. that helped lead to the passage of the Civil Rights Act of 1964. The monument will also tell the stories associated with other nearby Birmingham historic sites, including the Sixteenth Street Baptist Church– which was the site of a bombing in 1963; and Kelly Ingram Park, where Birmingham Public Safety Commissioner Bull Connor turned hoses and dogs on young civil rights protesters.

Reconstruction Era National Monument: Located in coastal South Carolina, the new Reconstruction Era National Monument encompasses four sites throughout Beaufort County that tell the vibrant story of the robust community developed by freed former African American slaves in the Reconstruction Era South. This designation includes the Brick Baptist Church and Darrah Hall at the existing Penn Center on St. Helena Island as well as the Old Firehouse in downtown Beaufort and parts of Camp Saxton in Port Royal where the Emancipation Proclamation was read on New Year’s Day in 1863. These sites establish the first unit of the National Park System focused on telling the story of Reconstruction. Protection for these sites is strongly supported by the local communities, elected officials, and a wide variety of stakeholders including civil rights organizations, environmental justice groups and historic preservation groups. Each designation was also supported by legislation introduced by members of the Alabama and South Carolina delegations.

Promoting Diversity and Inclusivity in Managing Our Public Lands and Water

President Obama is taking new steps to promote diversity and inclusivity in our nation’s system of national parks, national forests, monuments and other public lands and waters. Today, President Obama issued a Presidential Memorandum directing the agencies charged with managing the vast majority of America’s public lands and waters – the Department of the Interior, the U.S. Forest Service, the U.S. Army Corps of Engineers, and the National Oceanic and Atmospheric Administration – to work to ensure that all Americans have the opportunity to experience our great outdoors and engage in decisions about how our public lands and waters are managed. The Memorandum also directs agencies to prioritize building a more inclusive Federal workforce that is reflective of the diversity of our Nation.

Expansion of California Coastal National Monument: Today, President Obama is expanding the existing California Coastal National Monument by 6,230 acres to include six additional coastal sites proposed for protection in legislation introduced by members of the California Congressional delegation in 2015. The monument was originally designated in 2000 by President Bill Clinton and expanded by President Obama in 2014 to include Point-Arena-Stornetta in Mendocino County. Today’s expansion will protect incredible coastal natural resources, scenic views, and areas of cultural and historical significance, including sites that provide insight into the Native peoples who first lived along California’s coast and places still important to local tribes today.

Expansion of Cascade-Siskiyou National Monument: Located in southwest Oregon and northern California, the current Cascade-Siskiyou National Monument protects the significant biodiversity at the intersection of three distinct bioregions, including wildlife habitat for nearly 200 species of birds. Drawing from two different reports compiled by the scientific community as well as a legislation introduced in the Senate in 2015, today’s expansion will protect more than 42,000 additional acres of public land in Oregon and approximately 5,000 acres in California to increase vital habitat connectivity, watershed protection, and landscape-scale resilience for the area’s unique biological values, particularly in the face of growing impacts from climate change.