People of all ages came together at four different locations in NW Washington to send a message to the Department of Defense in Washington D.C.: No New Jets No New Flights. 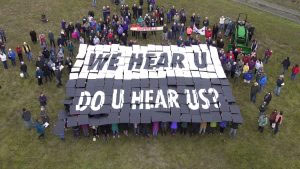 Approximately 700 people at four different events (500 Coupeville, and approximately 75 at each venue for Port Townsend, Lopez Island, and Anacortes) came to send a message loud and clear to their elected officials and the Navy - We hear you. Do you hear us? No New Jets. No New Flights.

Post cards were written and social media was engaged to send messages to elected officials in Washington D.C. This link has video of the performance of almost 500 people sending a message to the DoD. Link to photos and video here: https://sounddefensealliance.org/sound-off-rally/. 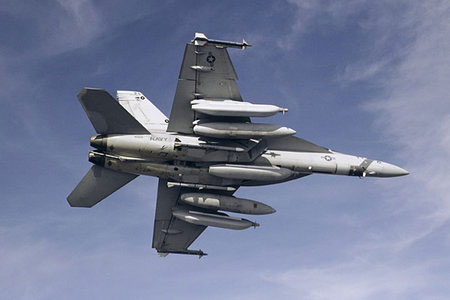 The Department of Defense (DOD) released their Final Environmental Impact Statement (FEIS) on Friday, September 28, 2018 proposing massive increases in Growler jets at Naval Air Station Whidbey Island (NASWI) in geographic impact and operational activities across Puget Sound. In response, community rallies across Puget Sound attracted enthusiastic crowds to send a message to their elected officials, who have only the next 24-days to comment and to influence the DOD. The Congressional Delegation and the Governor have a limited window in which to influence this decision.

According to Maryon Attwood, Chair of the Sound Defense Alliance, "The Department of Defense is trying to convince the public that this final preferred plan is a reduction, not an expansion.

"Information cards are being sent from the Navy to people's homes to claim a 30% reduction from the draft EIS as a framework to make the proposal look less impactful. This is blatantly untrue. You can't claim a reduction on something that never existed. They are trying to hide the fact that their proposal is all about huge increases: 36 more jets, increased operations at Ault Field, major increases at Outlying field in Coupeville (four times more) and increased geographic noise and pollution encroachment over regions of the Pacific Northwest that have not been previously impacted. In fact, new noise will occur in many new areas at dangerously loud levels. Never before has the Navy been allowed to fly more than 50% of their Field Carrier Landing practices (FCLPs) at the OLF in Coupeville. Now they propose to increase FCLP's by 80% over Coupeville (from 6100 to 24,000 operations) threatening Ebey's Landing National Historical Reserve and Central Whidbey's schools, gathering centers and the County hospital.

"Our communities have partnered with the Military in protecting our national security for decades" but this proposal is just too much. Any expansion of the Growler Jet program is destructive to our communities because of the incredible noise, pollution, and economic impacts. We need our elected officials to stand up for us," stated Mark Lundsten, Indivisible Fidalgo and group member of the Sound Defense Alliance.

The Sound Defense Alliance is a new voice in Washington of over 12 organizations across the region with memberships totally currently about 25,000 strong and growing, working to protect our communities and natural environment from increasing and harmful impacts of expanded military activity around Puget Sound and the Olympic Peninsula.

"There are alternatives," Attwood says, "and we are more than willing to work with the DOD and elected officials to find better solutions to decrease the jet noise. The Navy could, for example, be dual-siting its Growler jets. Alternatives and national air security needs could be met at alternative military fields by moving some of these jets elsewhere; or they could continue to use other Naval airfields closer to deployment and maintenance areas, as they do now. Instead, the DOD has approved basing ALL of the Navy's jet-based electronic warfare assets on Whidbey Island. Single siting Growlers on Whidbey Island is a risk to national security and operational readiness. This EIS did not even look at other sites."

"We are demanding that our leaders lead and yesterday was just the beginning " No New Jets No New Flights," concluded Chris Hurley, Coupeville Community Allies, group member of Sound Defense Alliance.

"We are aware that some people are opposed to our training activities, as well as the proposed increase in operations at the entire NAS Whidbey Island  complex. We support every American citizen's rights under the Constitution to  express their views and opinions. We have and will continue to provide facts  when asked and will continue to work with elected community leaders to find mitigations when practical.

"It's also important to understand that the Department of Defense and the Navy  believes there is a need for more airborne electronic warfare capability, a specialized function that is critical to protecting US forces called into  harm's way.  The dedicated platform for that is the EA-18G Growler and it's  center of excellence is here at the NAS Whidbey Island complex."

For more information about the Sound Defense Alliance and Quiet Skies Over San Juan County: