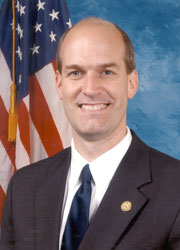 WASHINGTON, D.C.—Rep. Rick Larsen (WA-02) today issued the below statement ahead of voting in support of the bipartisan, bicameral agreement to fund the federal government for the remainder of the fiscal year:

“The 35-day partial government shutdown put 800,000 American workers, including more than 10,000 Washingtonians, and their families in a tough spot of choosing between their job and putting food on the table,” said Larsen. “I am hopeful the president will sign the funding agreement to keep Americans working without a fear of missing another paycheck.”

The bipartisan, bicameral agreement provides funding for smart, effective border security, including $1.375 billion for new fencing, and addresses many of the administration’s claims about the security of the southern border.

The administration claims there is a humanitarian crisis on the southern border. The funding agreement would help create a more humane immigration system by increasing the total number of participants in the Alternatives to Detention program and providing additional funding for enhanced medical support, transportation, food and clothing for those in detention, particularly children and families.

The administration claims a wall will stop drugs from coming into the U.S., but the Drug Enforcement Agency found that drugs smuggled across the border by Mexican cartels mostly come through legal ports of entry, hidden inside of passenger vehicles or tractor-trailers. The funding bill will allow for new border security technology, equipment at ports of entry, opioid detection equipment and 600 new Customs officers.

“The funding bill is a good border security compromise and will keep federal employees at work and ensure they continue to receive a paycheck. I look forward to working on a broader comprehensive immigration reform package and addressing other important immigration issues such as the Deferred Action for Childhood Arrivals (DACA) program and ending the detentions and deportations of refugees from Vietnam,” said Larsen.

More in this category: « AG Ferguson urges DeVos to leave protections in place for sexual violence survivors Secretary Wyman testifies to Congress about the importance of empowering states to administer elections »