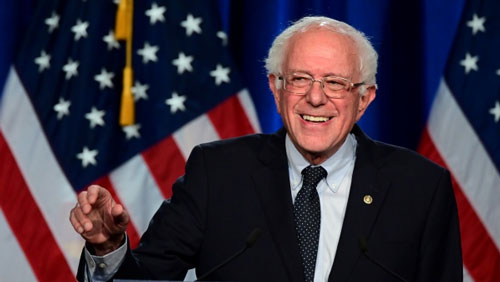 WASHINGTON - Today, January 8, 2020, 10 elected officials and one community leader from across Washington announced their support for Bernie Sanders’ candidacy for President of the United States.

These endorsements come on the heels of the campaign announcing the hiring of Carin Chase as Washington State Director and Shaun Scott as Washington Field Director.

According to the campaign Bernie 2020 already has an unparalleled volunteer army in Washington. To date, volunteers for Bernie 2020 have already held over 750 events such as phone banks and canvasses across Washington. Additionally, Bernie 2020 has received over 248,000 donations from Washingtonians totalling over $5 million.

The slate of endorsements includes:

Councilmember Teresa Mosqueda serves over 725,000 residents in Seattle as the citywide Councilmember in Position 8. Coming from the labor movement, and having served as the Political Director for the Washington State Labor Council AFL-CIO, Mosqueda ran and won as a proud Labor Democrat. Mosqueda's top priority on City Council is promoting healthy communities, lifting-up working families, and creating more affordable housing for all residents through the city. Mosqueda works every day to build an economy that works for all, and has dedicated her career to amplifying the voices of the most vulnerable in our communities. Mosqueda was named one of Seattle’s Most Influential People 2018 for her work on critical legislation in her first year in office - such as passing the first city-level Domestic Workers Bill of Rights, and was awarded the Local Progress 2019 Ady Barkan Progressive Champion Award. Mosqueda is a Chicana and works everyday to make her parents who are activists and educators proud by raising the peoples voice in the halls of power.

Kshama Sawant is a Seattle City Council Woman and member of Socialist Alternative. First elected in 2013, Sawant spearheaded the successful struggle to make Seattle the first major city to pass a $15 minimum wage. She has been twice reelected, most recently in 2019, after defeating Amazon's heavily-financed attempt to oust her in the most expensive city council race in Seattle's history.

"I'm all in for Bernie because we need a political revolution against the billionaire class, and an Organizer in Chief prepared to build the movement of millions needed to win far-reaching change. I strongly support Bernie's fight for Medicare for All and for a Green New Deal. I agree with Bernie that billionaires should not exist and that we need a society that works for working people - in my view, a socialist society."

Bob Hasegawa is a lifelong resident of Washington State. He is a third generation Japanese American whose entire family was incarcerated, without charges and in violation of their Constitutional rights, during WWII in an American concentration camp, simply because they were of Japanese ethnicity. He’s a longtime labor and social justice activist and is a seasoned professional commercial truck driver, certified transit operator, and journey-level operating engineer (heavy construction equipment operator). He led many workers struggles, winning top wages and benefits for working families and retirees, and collaborated in many social justice struggles to protect our civil rights, democracy, and the environment. For 32 years, Bob was a member of the International Brotherhood of Teamsters, where he led one of the largest local unions in the Pacific Northwest (Teamsters Local 174).

"I am endorsing Senator Bernie Sanders because he not only has the strongest, but ONLY meaningful workers rights and labor platform amongst all the presidential candidates. I wholeheartedly endorse his platform to strengthen the rights and wages of our workers, a platform I would have been proud to write myself-- a true pathway to building a middle class again in America."

Girmay Zahilay is the King County Councilmember representing District 2. He is the son of Ethiopian refugees, was raised in public housing in South Seattle, and graduated from Franklin High School. He is an attorney, non-profit founder, and anti-poverty advocate.

"In a system of politics that’s designed to corrupt, Bernie Sanders has maintained his integrity for decades. No one can accuse this man of taking stances based on corporate interests or political ambition. He has been fighting for what’s right and what’s just for his whole career. We need more politicians like him and I believe our country will be much better off if he is elected president."

Kate Burke is a Councilwoman from the City of Spokane. She tirelessly fights for just housing, equity in transportation, and environmental protection.

"In the era of rising rents and stagnant wages, we need a president willing to take a stand against corporate interests and the ruling elites. Senator Sanders, more than any other candidate, has proven the most committed to working families and has led a career that centers those at the margins of our society. It is my honor to endorse him for President.

"I'm all in for Bernie Sanders, this campaign, and the #NotMeUs movement. At a time when our families and communities are hurting; when climate change threatens life as we know it; when powerful interests are trying to divide us by race, gender, orientation, religion, and national origin; when the math of making ends meet becomes more impossible by the day--this candidate, this campaign and this movement make me feel optimistic about our future. Optimistic about possibility. About shared prosperity; about affordable housing, childcare and medical care for all; about clean water and safe communities; and optimistic we can tackle climate change by transforming our economy from a high-stakes investor-class casino to one that works for people and planet. This is our vision. Bernie Sanders has been working toward it for decades. He's the only candidate speaking realistically and practically about the deep systemic change we need. I'm ready for a system upgrade, and a majority in this country are ready, too. With Bernie, we can do it."

In 2017, Jordan Sears ran as a write-in candidate for the Sultan School District Board of Directors running on a platform of strengthening our teachers union and more input from students. After receiving 10% of the vote, Sears became secretary of the Sky Valley Citizens for Schools in 2018, which passed two levies that lowered the local tax rate but helped ensure more funding from the state. Shortly after, Sears joined the 39th Legislative District Democrats and in the last two years worked hard and was elected Chairman. In March, 2019,, Sears was appointed to the Gold Bar City Council and was retained for a full term this past election. In January, 2020, Sears was elected as the Mayor Pro Tem of the city of Gold Bar. "I support Bernie Sanders for President because as the son of a British immigrant, I understand the importance of a healthcare system that works for the people and not for greedy corporate shareholders. In my line of work I see people struggling financially because of low wages, medical debt and student loan debt. We must have a compassionate government that puts the interests of the people first and not the interests of Billionaires and corporations who don't pay taxes. We have to have a government that works for the many not the few."

Varisha Khan is one of the first Muslim women elected in WA State and the youngest to serve in the Redmond City Council. Varisha is an activist, whose work has focused on building power for minorities through non-profit organizing, lobbying, politics, PR, and journalism. During the 2016 presidential cycle, Varisha was elected to serve as both one of the youngest Presidential Electors in the historic Electoral College and one of the youngest National Delegates to represent Bernie Sanders voters from WA State’s 1st Congressional District. Varisha has been called “a political leader and media pundit” by The Seattle Globalist, and has been featured in NBC News Asian America, CBC Radio, NPR, The Seattle Times, the Seattle Met magazine and other local and national publications speaking on politics, intersectional issues of Islamophobia, xenophobia and racism, and making it clear that Black Lives Matter.

"The 2020 election is bigger than beating Trump or Red vs. Blue, it's about the American people regaining trust in our elected leaders to help us. I believe that Bernie's track record of uplifting working class Americans and his ability to unite people across party lines are what make him the kind of leader we need. From the kitchen table to the workplace to the neighborhoods we live in, we will get the quality of life Americans deserve with Bernie at the helm."

Iris Carais, originally from Honduras, has lived in Skagit County for 26 years. She currently works for the Mount Vernon School District as the Migrant Program Educator. Iris was inspired to get involved in local politics and run for City Council after Bernie’s 2016 campaign. She won her seat by 52 votes and made history by being the first Latina elected to the City Council. She wants to inspire future generations to stand up and make their voices heard.

“I support Bernie for president because he has given a voice to those who have been left behind, he’s been fighting consistently over the years for working people, immigrants and minorities. He is taking a stand for immigration reform, Medicare for All, affordable housing, funding public education, and combating climate change. As a woman of color, I support Bernie because I know the movement he has created will continue to inspire a diverse group of people to get involved in the political process to change our country.”

Senator Chase served in the Washington State Legislature for 16 years as one of the most progressive voices seeking justice for everyone. A member of seven generations of family living in the State of Washington, she is a passionate advocate of human rights as the foundation of public policy at all levels of government.

“I support Bernie Sanders because I have confidence that he will lead us in crafting our desired legacy for the next generations. That legacy will be sustainable and based upon the justice and fairness that we all want. He respects us and will restore the confidence, dignity and principled governance that we want for our country and our people.”

Jeff Johnson is a 40+ year member of the labor movement, an activist and labor leader. He stepped down from being President of the Washington State Labor Council, AFL-CIO in 2019. Jeff spends his time writing and speaking about labor and community, forging a climate justice movement to provide a “Just Transition” and a “Green New Deal” for communities of color, indigenous peoples, and the working class.

"Given the existential climate crisis, obscene inequality, and great threats to democracy, we need systemic change. This is no time for small changes or small politics. Bernie Sanders is the only candidate thinking, talking and organizing around dramatic changes to health care, climate, and the financial industry. With Bernie, you get strong values, a positive and inclusive vision of the future, and years of experience getting things done in Congress."

Organizations listed for identification purposes, and do not imply institutional endorsement.

More in this category: « $191 million in debt forgiveness and refunds in FTC/The University of Phoenix settlement