OLYMPIA — Attorney General Bob Ferguson today announced a court order requiring the U.S. Navy to stop scraping the hulls of decommissioned ships in a way that releases metals and other contaminants into Sinclair Inlet near Bremerton. The Navy must also begin a multi-million dollar project to reverse the environmental damage caused by scraping decades of marine buildup off the hull of a ship. 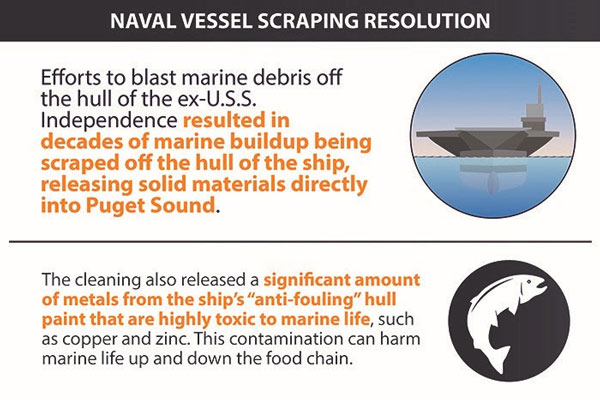 This resolution, filed today February 13, 2020  in U.S. District Court for the Western District of Washington, is the result of a lawsuit from the Suquamish Tribe, Puget Soundkeeper Alliance, the Washington Environmental Council and the Attorney General’s Office. The coalition lawsuit asserted that the military branch violated the federal Clean Water Act and the state Water Pollution Control Act by releasing toxic substances into Puget Sound without a permit.

The lawsuit followed the Navy’s January 2017 efforts to blast marine debris off the hull of the ex-U.S.S. Independence, a 60,000-ton, decommissioned aircraft carrier, before transport and scrapping. In doing so, the Navy released approximately 73 dump-truck loads of solid materials into Puget Sound. The cleaning also released a significant amount of metals from the ship’s “anti-fouling” hull paint that are highly toxic to marine life, such as copper and zinc. This contamination can harm marine life up and down the food chain. For example, copper can harm salmon’s ability to navigate to spawning streams or to avoid predators.Image: Under this consent decree, the Navy is legally required to: Stop in-water scraping of its inactive fleet for 10 years; any hull cleaning of inactive ships during the moratorium must be done in a dry dock; place a layer of clean sediment on impacted portions of Sinclair Inlet. 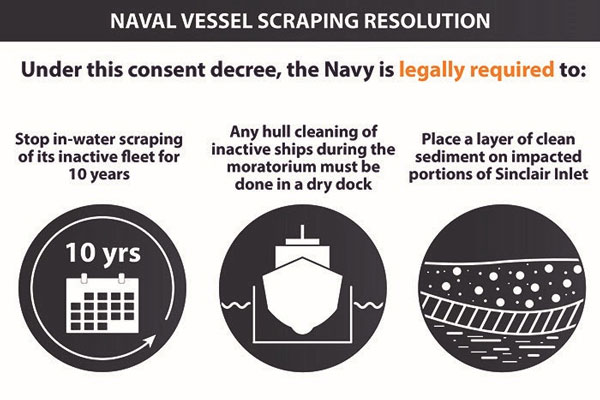 Under today’s consent decree, the Navy is legally required to stop in-water scraping for 10 years. During the 10-year moratorium, the Navy must clean inactive ships that require scraping in a dry dock, out of the water, to prevent releasing materials directly into Puget Sound. In addition to the moratorium, the Navy must prevent additional environmental damage caused by the scraping of the ex-Independence by placing a layer of clean sediment on the impacted portions of Sinclair Inlet. The Navy must also reimburse the fees incurred by the Attorney General’s Office and other plaintiffs.

“The Navy’s reckless actions endangered Washington’s diverse marine life, including salmon and orcas,” Ferguson said. “Everyone has a duty to protect our waters, including the federal government. Today’s order holds the Navy accountable and ensures it will stop its harmful ship scraping practices.”

“The ancestral waters and the marine habitat of Sinclair Inlet are vital natural and cultural resources that have supported the Suquamish people since time immemorial,” said Leonard Forsman, Chairman of the Suquamish Tribe. “This settlement will help protect these marine resources for future generations. By avoiding protracted litigation, this agreement is also a step toward repairing the Tribe’s and Navy’s government-to-government relationship, while the Tribe continues to protect treaty-reserved waters.”

“Puget Sound recovery requires commitment at all levels to stop ongoing pollution and prevent future harm,” said Katelyn Kinn, Clean Water Attorney for Puget Soundkeeper. “Puget Sound boaters are excellent environmental stewards who know that this type of in-water scraping is unacceptable. We are glad to see the U.S. Navy agree to come into better alignment with these values, and set a better example moving forward. This settlement demonstrates that no entity in this country, regardless of how big or powerful, is above the laws in place to protect our precious waters and the communities that rely on them.”

“All of us who rely on and live near the Sound need the Navy to act as partners to protect our shared waters,” said Mindy Roberts, Puget Sound Director for Washington Environmental Council. “Today’s settlement should be a strong lesson for the future, where we ensure something like this will never happen again.”

The Puget Sound Naval Shipyard in Bremerton provided dock space for the ex-USS Independence, a 60,000-ton aircraft carrier decommissioned in 1998. In 2016, the Navy decided to transport the ship to a recycling facility in Texas for dismantling.

Before moving the decommissioned ship, the Navy consulted with the National Marine Fisheries Service (NMFS) — as required by law — to ensure that the move would not pose any dangers to threatened or endangered species. NMFS recommended that the Navy clean the hull to avoid spreading potential invasive species. NMFS also provided suggestions on how to do so while minimizing discharges of potentially toxic waste into Sinclair Inlet. For example, NMFS recommended cleaning up any debris as soon as possible after cleaning. The Navy did not clean up the debris released from scraping the hull.

After announcing its plan to clean the ex-Independence, the Navy ignored concerns from both the U.S. Environmental Protection Agency (EPA) and the Washington State Department of Ecology about the release of pollutants into Puget Sound. The EPA recommended that the Navy clean the ship in a dry dock, out of the water, to prevent releasing materials directly into the inlet. Despite these concerns, the Navy proceeded to clean the hull of the ship in the waters of Sinclair Inlet in early 2017.

Samplings taken by the Navy both before and after the cleaning found that the level of pollutants it released while cleaning the ex-U.S.S. Independence far exceed standards allowed by Washington state.

After the results of the Navy’s own sediment sampling came to light and showed the magnitude of metals released from the hull cleaning, Ferguson sent a letter in January 2019, advising the military branch that he would join the organizations’ lawsuit if it did not resolve the issue within 60 days. When the Navy did not resolve the issue, Ferguson filed a motion to intervene in the lawsuit in the U.S. District Court for the Western District of Washington. When it joined the suit, the Attorney General’s Office brought additional, unique claims that the Navy violated the state Water Pollution Control Act.

Assistant Attorneys General Kelly Wood and Aurora Janke with the Counsel for Environmental Protection handled this case on behalf of the Attorney General’s Office.

Protecting the environment is one of Ferguson’s top priorities. In 2016, he created the Counsel for Environmental Protection to protect our environment and the safety and health of all Washingtonians.