NAVAL AIR STATION WHIDBEY ISLAND, Wash. – A Search and Rescue (SAR) team from Naval Air Station (NAS) Whidbey Island conducted its first two missions for this calendar year January 4 and 5, as well as two other mission in the last week of December.

Both 2022 missions were Medical Evacuations (MEDEVACs), one from Coupeville on January 5 for a six-year old boy suffering from pneumonia, the other from Lopez Island the day prior for a 73- year old woman suffering cardiac complications. 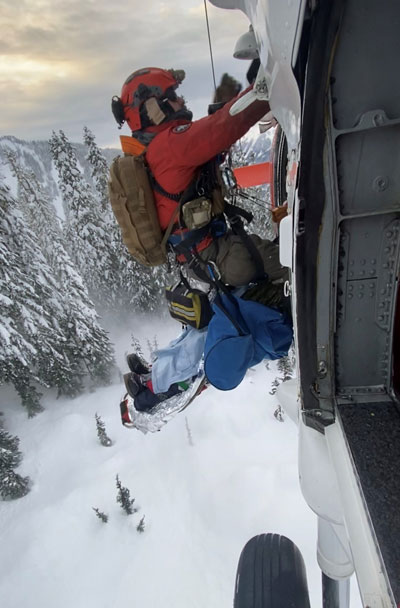 The NAS Whidbey Island SAR team received notification for assistance for the child in Coupeville while on a training mission just before 2:30 p.m. After refueling they proceeded directly to Whidbey General Hospital in Coupeville, then flew the boy to Seattle Children’s Hospital in Seattle.

For the Lopez Island request, NAS Whidbey Island received an alert Monday afternoon and was able to transport the patient from Lopez Airfield to St. Joseph’s Medical Center in Bellingham at approximately 3:30 p.m.

NAS Whidbey Island’s SAR unit closed out 2021 with another MEDEVAC from Coupeville to Swedish Medical Center in Seattle for a 72-year-old man who suffered a severe stroke on December 30, 2021. The day prior, a SAR team rescued a man who suffered a broken leg in the Cascades, approximately 15 miles north of Berdeen Lake, and flew him to St. Joseph’s Medical Center.

The Navy SAR unit operates three MH-60S helicopters from NAS Whidbey Island as search and rescue/medical evacuation (SAR/MEDEVAC) platforms for the EA-18G aircraft as well as other squadrons and personnel assigned to the installation. Pursuant to the National SAR Plan of the United States, the unit may also be used for civil SAR/MEDEVAC needs to the fullest extent practicable on a non-interference basis with primary military duties according to applicable national directives, plans, guidelines and agreements; specifically, the unit may launch in response to tasking by the Air Force Rescue Coordination Center (based on a Washington State Memorandum of Understanding) for inland missions, and/or tasking by the United States Coast Guard for all other aeronautical and maritime regions, when other assets are unavailable.