The details of the arrest by U.S. Customs and Border Patrol officers of a Canadian man May 25, 2022 in the San Juan Islands are posted below in the probable cause statement. The suspect piloted a 18-ft Bayliner Cruise to Washington Park in Anacortes where it was placed on a trailer and taken by men. The boat was returned the next day, loaded with 1,431 pounds of meth. The suspect headed toward Sidney, B.C. He was stopped for a document check near Stuart Island. Customs and Border Patrol officers noticed the boat was riding extremely low in the water. 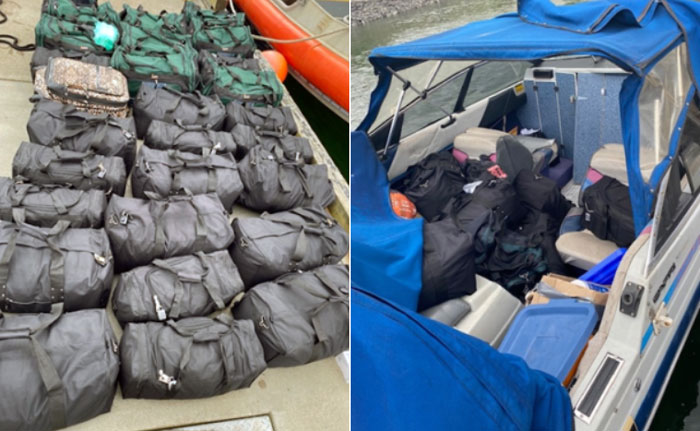 SUMMARY OF PROBABLE CAUSE

As set forth in greater detail below, I [written by a Special Agent of the United States, Immigration and Customs Enforcement, Homeland Security Investigations] believe that defendant TED KARL FAUPEL possessed approximately 1,431 pounds of methamphetamine with the intent to distribute it.

8. On May 25, 2022, at approximately 0:00 a.m., CBP AMO Vessel 332120 (Ml20) conducted a vessel stop south of Stuart Island in position N48°37.996 23§ Wl23°13.863. The vessel stopped was a Bayliner Capri recreational boat approximately 18 feet in length, heading westbound toward the US/Canadian Border. Blue lights and sirens were engaged to initiate a vessel stop to conduct a document check as per U.S.C.~ 1581 and to determine if the captain intended to go outbound to Canada.

9. The Bayliner vessel did a slow tum to port and then eventually came to a stop. Office of Field Operations (OFO) officers  proceeded to the bow of CBP vessel M-120 to conduct a boarding of the vessel. They observed that the Bayliner had a Canadian registration of (1K2551) on the side of the vessel, and that the vessel itself was riding extremely low in the water like it was overloaded.

11. At this point, the OFO officers decided to board the Bayliner and conduct an outbound border search since FAUPEL came from Canada, and stated he was heading back to Canada. FAUPEL's direction of travel and proximity to the border indicated this as well. OFO Officer asked FAUPEL if he had any guns onboard to which he stated "no." FAUPEL was then asked if he could remove the back canvas of the Bayliner so that OFO officers could go onboard. FAUPEL complied.

12. Once the canvas was removed, 10-15 duffle bags were revealed stacked on the back deck. The duffle bags also had padlocks on the zippers of the bags.

13. OFO Officers  proceeded onboard the vessel to conduct a border search. OFO Officer  asked FAUPEL if there was anything on the boat he was not supposed to have. He stated not to his knowledge. FAUPEL was asked what was in the duffel bags, to which he replied that he didn't know.

14. Under customs border search authority, OFO Officer  made a small  cut in one of the duffle bags to reveal its contents. It revealed vacuum sealed bags with  crystal like rocks consistent with methamphetamine. FAUPEL was taken into custody at  that time and was transported along with the vessel to the Bellingham Coast Guard  station where he was turned over to Homeland Security Investigations (HSI) for further  investigation.

15. Meanwhile, on May 25, 2022, at approximately 10:50 a.m., CPB OFO alerted SA  about the boarding, and we responded to the Bellingham Coast Guard Station. At approximately 12:00 p.m., OFO vessel M-120 with FAUPEL in custody and the Bayliner Capri operated by an OFO arrived and docked.

16. Upon arrival, CBP officer  conducted a sweep of the vessel with K9 Rocco, who alerted to the presence of narcotics. The vessel was then unloaded, and agents removed a total of 28 duffel bags of suspected packaged methamphetamine from the deck, cabin, and cuddy area of the boat. The duffle bags were all secured with luggage padlocks.

17. Two duffel bags were opened, and the contents field tested. The test returned results consistent with methamphetamine. All the duffle bags where then transported to evidence storage, where the contents were removed and weighed. The bags  contained 539 packages of methamphetamine for a total amount of 1,431.81 pounds (or 649.46 kilograms).

18. Agents also removed a backpack from the boat, in which a loaded 9mm pistol was found, along with a box of 9mm ammunition. Agents discovered a ledger in  the backpack that documented details regarding this narcotics smuggling event, as well as  others. Also discovered were three cellular phones and a single US dollar bill that had  "28 duffle bags" and a signature on it. Based on my training and experience, this is a verification method used by drug trafficking organizations in order to maintain security  while transporting narcotics.

19. FAUPEL was interviewed at approximately 12:13 p.m.  The interview took place in the English language, and the audio was recorded via digital audio recorder. FAUPEL was read his Miranda rights, which he stated that he understood.

20. During the interview, FAUPEL stated that he resided in the area of Alberta, Canada, and that he was in Victoria, British Columbia, Canada looking for work. FAUPEL further relayed that while hiking by the marina in Sidney, Vancouver Island, he was approached by an individual he identified as "Mike," who hired FAUPEL for the  sum of $1,000 to drive a boat from Sidney, British Columbia to Anacortes, Washington and back to Sidney, British Columbia in order to transport "Mike's" luggage. "Mike" took a picture of FAUPEL's ID and then took him to the Bay liner Capri at the Sidney  marina.

21. FAUPEL departed on May 24, 2022, and arrived in Anacortes, WA at the Washington State Park boat dock that same day. FAUPEL stated that he was met by four  men driving a black crew cab Toyota with a boat trailer. They then transported FAUPEL  to the Anacortes Inn, where FAUPEL stayed by himself overnight.

22. On May 25, 2022 at approximately 7:00 a.m., FAUPEL left his room and was met by three men, who had loaded the Bayliner Capri onto the trailer behind the black Toyota Truck. FAUPEL was then driven back to the Washington State Park boat dock, where he was launched in the Bayliner Capri. He proceeded back toward Canada in the boat, where he was intercepted by the OFO boat.

23. Upon questioning, FAUPEL denied knowing anything about the narcotics  on the boat. He stated that he "found" the 9mm pistol. Upon further questioning, FAUPEL admitted that the 9mm pistol was his, and that he carried it for safety while  hiking but maintained that he believed that he was transporting luggage. FAUPEL stated  that after departing he drove the boat in circles and contemplated turning the boat in to  the police, but he did not because he feared for his family's safety.

24. When asked why he did not check in with US Customs upon entering the United States, FAUPEL stated that he didn't know that it was required. FAUPEL relayed that he was told to leave the boat at the Sidney Marina with the dollar bill on the seat.

25. Based on the above, there is probable cause to believe that TED KARL FAUPEL did knowingly and intentionally Possess with Intent to Distribute Controlled Substances, namely, methamphetamine, in violation of Title 21, United States Code, 2 Sections 84l(a)(l) and 84l(b)(l)(A)(viii).