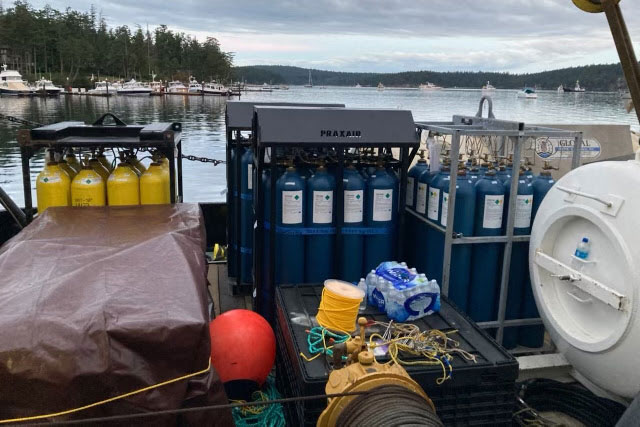 A mixture of oxygen and helium, known as heliox, is needed to dive at depths greater than 200 feet. The heliox has arrived on San Juan Island and is being prepared for use.

Contractor, Global Diving, arrived on scene, anchoring a barge and crane which will be used to raise the sunken vessel Aleutian Isle for transport. 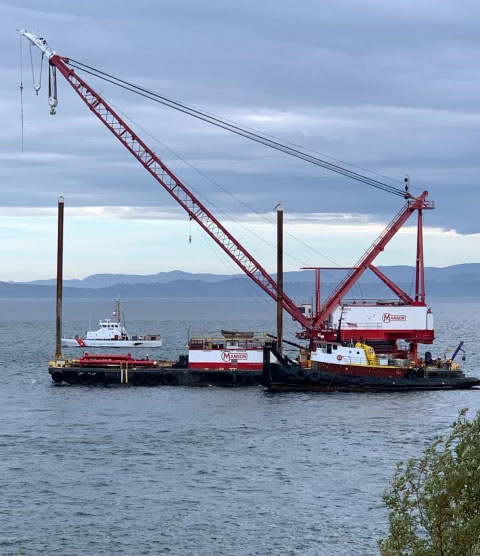 Once the dive team commences recovery operations, it is estimated to take ten days. Weather and tidal currents will limit their window for safely diving the wreck each day. Dive operations include removing any hazardous debris and securing a safe dive site; verifying the vessel's structural integrity and securing fuel tank vents to prevent further pollutants from entering the water; and the process for conducting a successful recovery.

Dive operations can only be safely conducted during optimal conditions. These include above-surface weather, water currents, tidal swings and other factors. The safety of responders and supporting personnel remains the Unified Command's top priority.

To ensure a safe work environment, a temporary safety zone extends 1,000 yards around the dive site. Coast Guard crews are on scene enforcing the safety zone and can be contacted directly on VHF marine-band radio channel 16. 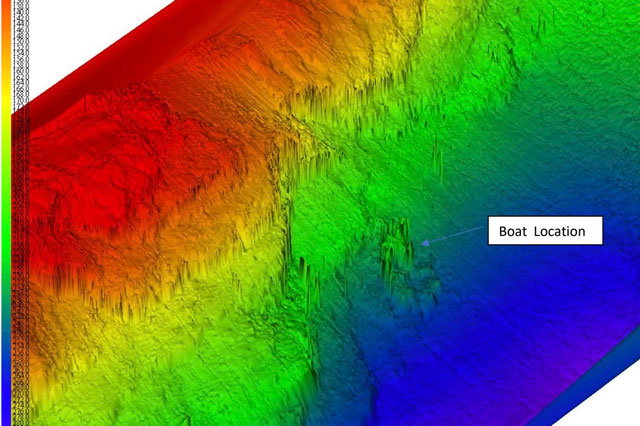 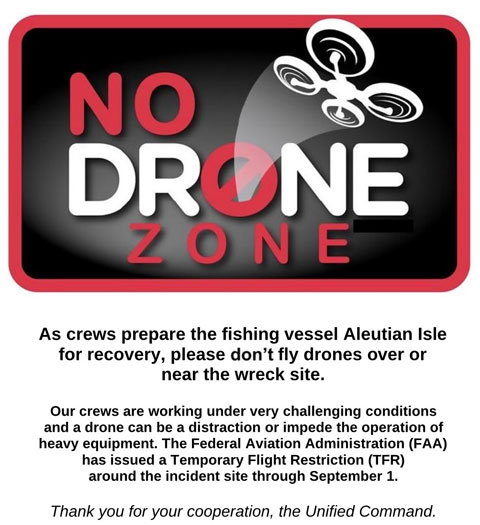 The Federal Aviation Administration (FAA) has issued a Temporary Flight Restriction (TFR) around the incident site. The public may not fly drones/UAS within this TFR zone, as they may distract crews during this complex operation and hamper recovery efforts.

The TFR extends up to and including 800 feet above areas around Henry Island and Garrison Bay south to areas around Eagle Point. The TFR will remain in effect until 1 a.m. Thursday, Sept. 1. All details about the TFR can be found on the FAA website here: https://tfr.faa.gov/save_pages/detail_2_6438.html

The Unified Command has continually employed unmanned aircraft systems (UAS) and Shoreline Cleanup and Assessment Technique (SCAT) teams to monitor sheening and other signs of pollutants potentially affecting the ecology on and around the incident site.

Inconsistent sheening is sometimes observable, typically during the morning hours in the vicinity of Sunset point. The observed sheen is unrecoverable, weathered diesel; and the Unified Command continues to assign responders to observe each individual report.

The locations of protected marine mammals, particularly Southern Resident Killer Whales (SRKW), have been continually monitored in a joint collaborative effort by the Unified Command and supporting organizations. No SRKW have been located near or approaching the area, but personnel continue to train in using acoustic deterrence tools, known as oikomi pipes, and are staged to respond if necessary.