SEATTLE, September 22, 2022 — Response crews were able to completely dewater the Aleutian Isle and lift it onto a salvage barge anchored in Mitchell Bay off of San Juan Island on Sept. 21, 2022. The 58-ft fishing vessel sank to a depth of more than 200 feet near Sunset Point August 13, 2022.

The vessel no longer poses a significant threat to the environment, and it will soon transit to a mainland facility for further investigation into the cause of sinking. 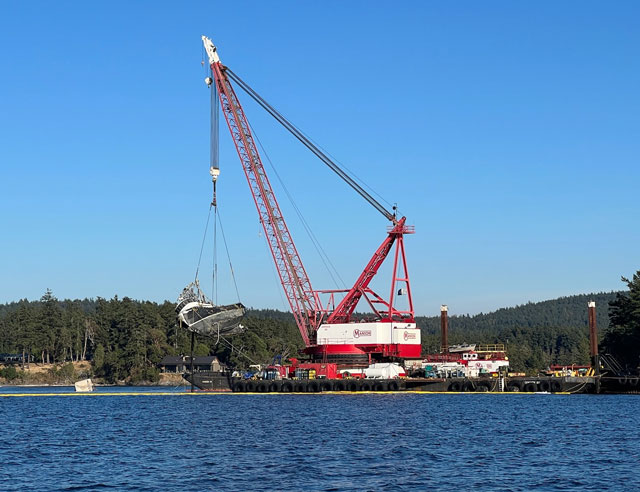 The Aleutian Isle is lifted out of water onto a barge September 21, 2022. WA Dept of Ecology photo

“We are so pleased to see the vessel safely out of the water,” said U.S. Coast Guard Cmdr. Kira Moody, federal on-scene coordinator representative. “The unique environment of the San Juan Islands and location of the vessel made this a complicated and technical response. Through the team’s expertise we were able to overcome any challenge safely and efficiently.” 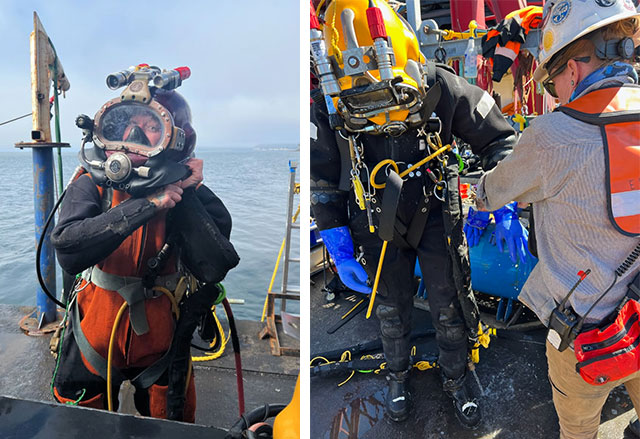 The 58-foot fishing vessel sank Aug. 13 near Sunset Point off San Juan Island with an estimated 2,500 gallons of diesel on board and 100 gallons of motor oil and other oils. It was recovered from over 250 feet of water in Haro Strait on Sept. 17 after weeks of complex dive operations. It was later towed to Mitchell Bay to provide divers and response crews a safer, shallower environment to prepare it for the final lift out of the water. 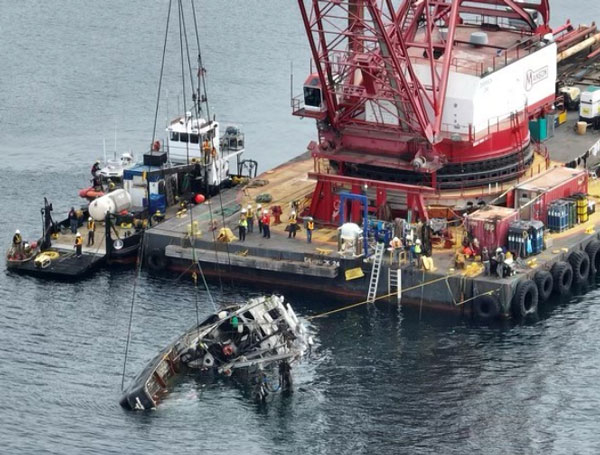 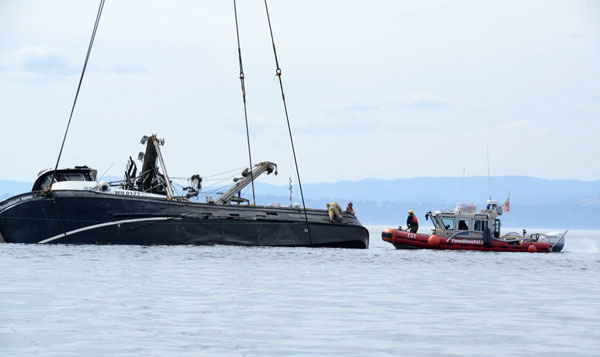 For perspective, the 58-foot Aleutian Isle next to a Coast Guard boat. 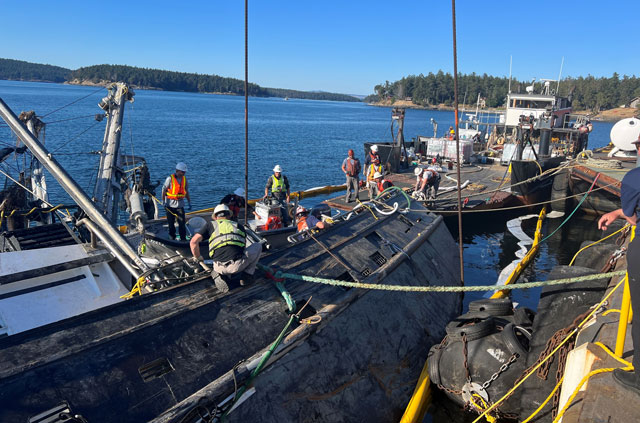 “We have done a lot of work in recent years to get equipment stationed on the island,” said Director of the San Juan Office of Emergency Management Brendan Cowan, local on-scene coordinator. “I am thankful that work paid off when we needed it the most. I want to thank everyone involved in this response for their efforts protecting the close-knit community that is the San Juans.” 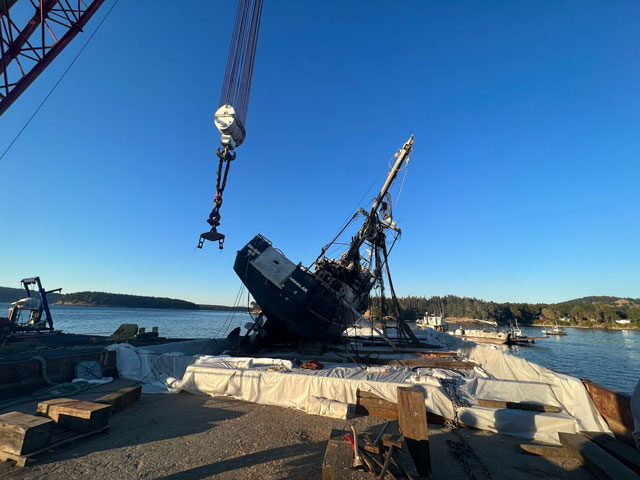 The Aleutian Isle on a barge after being lifted out of water September 21, 2022. WA Dept of Ecology photo

“It’s a relief to have the vessel finally out of the water,” said WA Dept. of Fish and Wildlife Don Noviello, wildlife branch director. “This area is special and unique. It has an incredible diversity of marine life. The whale deterrence team has spent countless hours monitoring and protecting the Southern Residents and other species from any sheening.”

Throughout the response, killer whale experts were on standby to deter killer whales from areas of active sheening, with extra attention on the endangered Southern Resident killer whales. Deterrents were successful during two separate events with a pair of transient killer whales. 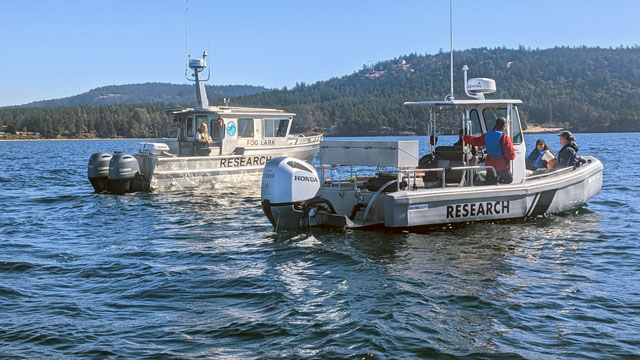 Birds landing in surface sheening was also a concern, especially the endangered marbled murrelet. Deterrence teams used proactive deterrence with air cannons and vessels to prevent birds from moving through areas of sheen.

“This is a big success for everyone who worked, in so many different ways, to make this happen,” said WA Dept. of Ecology Dave Byers, state on-scene coordinator. “Although the vessel was removed from the water, we will still monitor for any residual fuel that could impact the shoreline or wildlife. We will continue to have wildlife experts and shoreline assessment teams actively surveying the area looking for potential oil impacts for the next several days.”

Air quality monitors are being demobilized. Over the course of the response, monitors have shown no elevated readings. 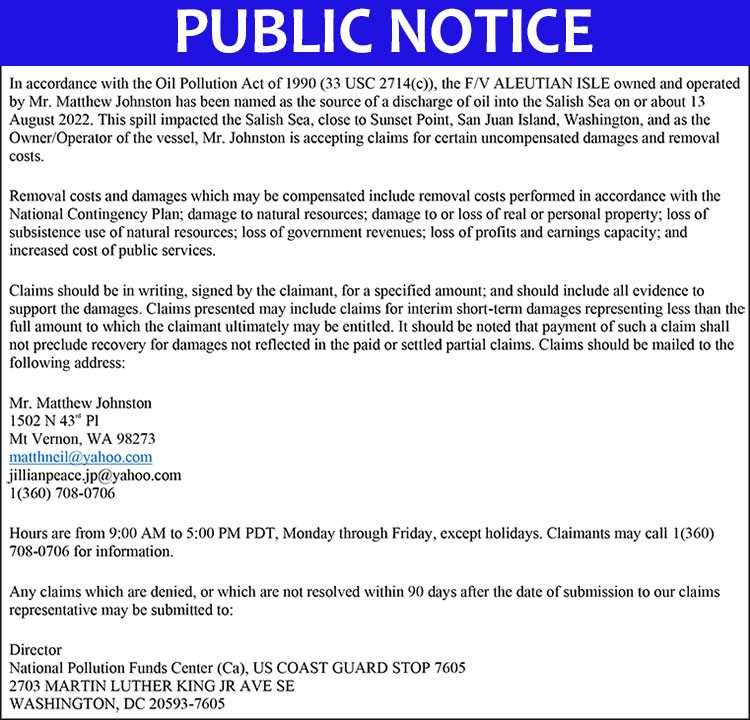