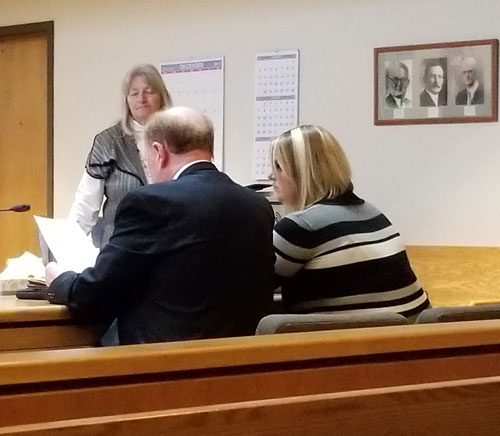 Kelsey O'Day entered not guilty pleas Thursday, December 14, 2017 in San Juan County Superior Court to three counts of Third Degree Rape of a Child.. The 27-year-old San Juan Island woman, is accused of engaging in sexual intercourse with a person who was at least fourteen years of age but less than sixteen years of age on October 23, 29 and 30, 2017.

At the arraignment, Judge Don Eaton agreed to lower the bail from $100,000 to $50,000. The higher bail was originally issued due to concerns she would not appear in court. She had traveled to Mexico for vacation after the original arrest warrant was issued.

O'Day's attorney noted that since she has returned she's shown up at two hearings plus a telephonic hearing. He requested her bail be reduced to zero. The Deputy Prosecutor objected and Judge Eaton declared he was uncomfortable with releasing O'Day on personal recognizance but would cut the bail in half.

Her release conditions were modified. Instead of being limited to San Juan County, she can travel throughout Washington State. If she wants to leave the state, she must obtain permission from San Juan County Superior Court.

According to court documents, on November 2, 1017 the woman told a friend she was "really stressed out" as "she had done something really stupid and she had slept with a minor." The friend figured out who the boy was and called his father later that day.

According to the court documents, the boy told the detective, the first two incidents were at his home on October 23 and October 29, 2017. The third time occurred on October 30, 2017 after she picked him up from school during his lunch break  and drove to Jacksons Beach where she performed oral sex on him in her car.

An arrest warrant was issued and charges filed November 16, 2017.