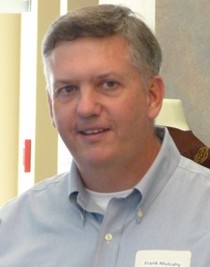 After 20 years in the U.S. Navy, Frank Mulcahy starts a new assignment October 17, 2011 as Public Works Director of San Juan County. He replaces Jon Shannon who stepped down in April after eight years in the position. Russ Harvey served as interim director while the county searched for Shannon's replacement.

Mulcahy, of Groton, Connecticut, holds a Bachelor's degree in Civil Engineering from Virginia Military Institute and a Masters in Construction Management from the University of Washington.

Some of the positions he held in the Navy were:

County Administrator Pete Rose said he was impressed with the breadth of Mulcahy's experience. During the interview process, Rose said, "I knew Mr. Mulcahy had the requisite skills to work with us islanders when he gave the example of a successful experience he had negotiating a new road that required the agreement of both Serbians and Albanians."

Thirty-six candidates were reviewed by the County Administrator, staff, and consultant Lynn Stokesbary of the Prothman Company of Issaquah. Five finalists were invited to Friday Harbor to attend a three-day interview process, which began September 8, 2011. Participants included members of the community, a council representative, members of the public works management team, three department heads and the County Administrator.