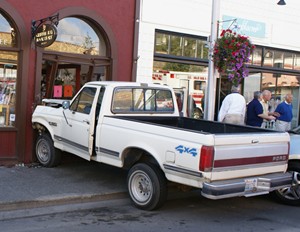 An 84-year-old San Juan Island man hit the accelerator instead of the brake, as he was hurrying into a parking space on Spring Street about 8:45 a.m. Monday morning and smashed into Griffin Bay Bookstore. No one on the sidewalk or in the store was injured as the pickup truck broke the door and surrounding glass.

The driver, was not believed to be injured, but as a precaution was treated by San Juan paramedics and EMTS at the scene for possible neck injuries and taken by stretcher to the medical center.

He told deputies he was hurrying because a driver was behind him and he was trying to get out of their way quickly.