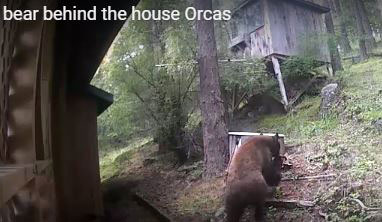 A 10-second video of the 5-foot tall black bear taken by a citizen on Orcas Island was given to the San Juan County Sheriff's Office. Scroll down to the end of this article to see the video.

The bear has been roaming on Orcas Island since Memorial Day weekend.  Most recently the bear was sighted on Alderwood Lane where he got into a 40-lb bag of dog food. He was also spotted near Point Lawrence.

Staff from the state Fish and Wildlife Dept are coming to the islands Sunday, June 4, 2017. A bigger bear trap will be brought to the island.

After it's caught, the state Fish and Wildlife Dept plans to transport the bear to the Cascade Mountains.

It is believed the bear swam over from Lummi Island.

The public is asked to please try to keep garbage locked up. Do not try to feed him. Please continue to call the Sheriff's Office business line at 360.378.4151 with information about any sightings. The information helps to track him.