So far the bear has been roaming over every part of San Juan Island.  If you see him please report it to the Sheriff's Office so we can track him. 360.378.4151. Here are some points to remember: 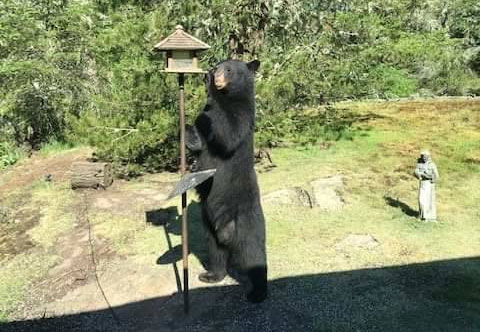 Photo of 2019 bear on Orcas Island.  Photo by Janice Williams

1. Washington State Department of Fish and Wildlife and the Sheriff's Office are working cooperatively to monitor the situation.

2. The bear's activities have been tracked since it left Camano Island a couple of weeks ago. At no point has the bear been reported to be agressive toward people or animals.

3. Reports indicate that the bear has been interested in bird feeders and unsecured trash exclusively. People are encouraged to remove attractants until the bear moves on.

4. The bear has been moving so quickly and unpredictably that live trapping for relocation is not feasible at this point. The Orcas bear that WDFW successfully trapped and relocated two years ago was far more predictable. 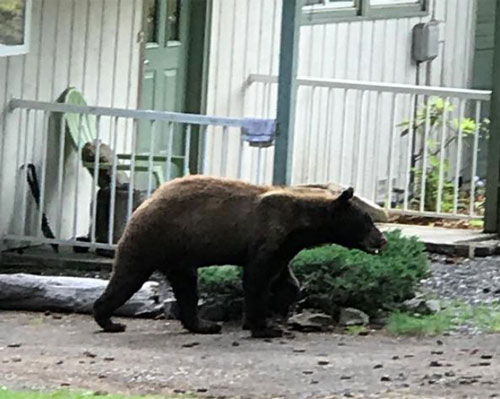 Photo of the bear that visited Orcas Island in 2017 and was trapped and relocated to the mainland. Jeff Morris photo

5. The bear appears to be a male. He is likely in search of companionship and will most likely continue his travels to another island at some point.

6. Hunting the bear is unlawful.

7. Lethal removal is not being considered. The bear has exhibited no known behaviors that would indicate it poses a threat to public safety, pets or livestock.

8. Despite the bear's non-threatening behavior, people should give the bear space and remember it is still a large wild animal.

More information on black bears and how to avoid conflicts can be found on WDFW's web site. https://wdfw.wa.gov/species-habitats/species/ursus-americanus

Editor's Note: There is a facebook page SJI BEARfoot watch group that has several photos of the bear. He was seen at Portland Fair, Mt. Finlayson, False Bay Road and several other places.