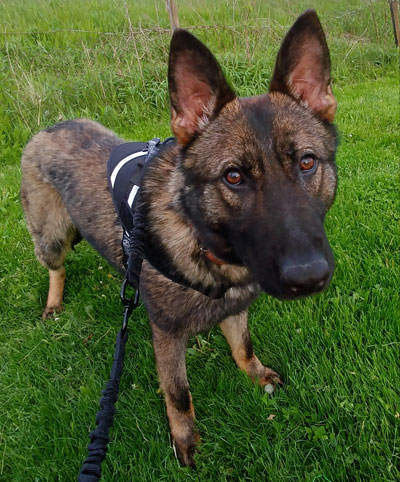 San Juan County Sheriff Ron Krebs posted the following information on Facebook about the drug-sniffing dog that the county swore in last month. and has now returned to the kennel where he was purchased.

"It is with tremendous sadness, K-9 Guss has been sent back to the kennels from which we purchased him. He is a tremendous dog and will do great things in his life and career as a law enforcement K-9, however it rapidly became apparent that he was not going to be a good fit with us.

"What Guss lacked was his ability to interact with everyone on a friendly level. Guss showed great traits in drug searching and using his nose, but unfortunately he also began showing an aggressive nature towards people. We worked with several experts to see if this was a trait that could be worked out and in the end it was decided to not take the chance. Guss will be missed by everyone at the Sheriff's Office, but he will find a new home quickly and will do a great job.

"It is not uncommon for an agency to get a dog and not have him work out on the first go around. In the beginning of August, Deputy Holt will go back and pick out another dog, one that will be a better fit with our community.

"Until then, stay tuned.....we will keep you updated when that happens." - Sheriff Ron Krebs

More in this category: « Phones fixed as of 4 p.m. Sunday, June 23 Driver arrested for vehicular assault after July 28 crash on San Juan Island »