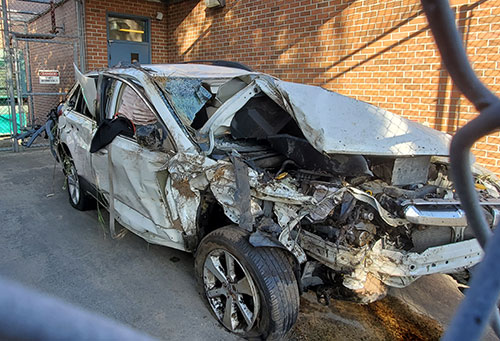 A Subaru Outback driven on Roche Harbor Road early Wednesday morning, August 28, 2019 left the roadway, rolled over, and caught fire. The three occupants, who were employed at Roche Harbor Resort,  were pinned inside. A San Juan county deputy arrived within minutes and extinguished the fire and began treating the three women.

San Juan Island Fire and Rescue and SJEMS arrived on scene and extricated the victims.

The driver was taken to PIMC, her two passengers were flown to Harborview Medical Center in Seattle. According to Roche Harbor Resort General Manager Brent Snow two victims are in critical condition. The driver was treated and released at PIMC.

According to the Sheriff Ron Krebs, it is believed that alcohol was a factor in the crash which is under investigation. The car was headed out of town when the accident occurred.