On July 4, 2018, San Juan County 911 received a report of a victim falling 40 feet down a rocky bluff on Obstruction Island and into the water. That call launched a prolonged and complex rescue that involved multiple agencies, presented numerous challenges, and recently led to the San Juan County Dispatch Team receiving the 2019 WA State Telecommunicator Team of the Year Award from the WA Chapters of the Association of Public Safety Communications Officials and the National Emergency Number Association. 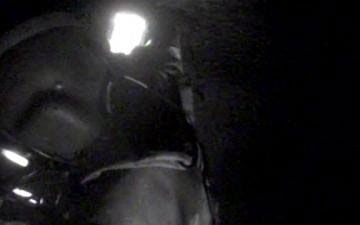 A still from a video shows an MH-65 Dolphin helicopter crew from Coast Guard Air Station/Sector Field Office Port Angeles hoists an injured female hiker and their rescue swimmer from Obstruction Island, Wash., July 4, 2018. Both were hoisted at the same time so that the rescue swimmer could operate a bag-valve mask and to maintain the hiker’s breathing.  CLICK for VIDEO  U.S. Coast Guard video courtesy of Air Station/Sector Field Office Port Angeles.

Sheriff Ron Krebs marvels at the difficulties faced, “This was at night in a remote location with limited radio communications, poor access, and a critically injured patient- all on one of our busiest days of the year. It’s really a testament to our 911 staff and our first responders that this call ended up with a positive outcome.”

The call first went to Whatcom County 911, but was quickly routed to San Juan County Dispatch in the Sheriff’s Office in Friday Harbor. The patient was critically injured and had stopped breathing. The Dispatcher advised the reporting party to initiate CPR, with instructions being relayed by voice to those providing aid at the water's edge. The initial call lasted for nearly 50 minutes until the arrival of Orcas Island Fire & Rescue staff by boat. Nick Wainwright, Robin DeLaZerda, and Stephanie Katzenjammer were all on duty in the 911 call center at the time.

Says Dispatch Supervisor DeLaZerda, “Eventually the patient was stabilized and lifted by Coast Guard helicopter to Bellingham and survived multiple serious injuries. This was a tense and involved rescue, and it’s an honor for our staff to be recognized like this. Much of the good work they do goes unnoticed, so this is a nice opportunity for us to pause and reflect on why what we do matters so much.”

Sheriff Krebs echoed that sentiment, “The Orcas Fire and Rescue personnel were critical. The citizens who assisted were amazing. The Coast Guard was vital. And the Dispatchers who coordinated and managed it all, they really gave it their all and I’m delighted to see them recognized.”

Says Dispatcher Nick Wainwright, “It is interesting to share this story with fellow Dispatchers from across Washington. The challenges we face in the islands are unique and this call in particular was hard. We just did what we were trained to do. I’m glad it turned out well, that’s the most important thing- but it is nice for us to get this recognition. It reflects well on our whole program.”

A San Juan County Dispatch representative will be traveling to the annual WA APCO/NENA conference in October to accept the award.