San Juan County Sheriff Ron Krebs honored Deputy Isaac Norton during the County Council meeting by presenting him with an award. Engraved on it are the words: For going above and beyond giving lifesaving measures. Norton received a life saving award. Sheriff Krebs explained why Deputy Norton was receiving a life-saving award. 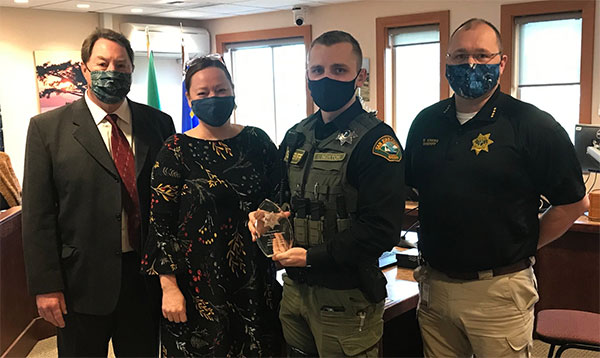 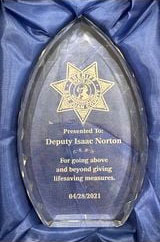 In April 2021, Deputy Norton was on duty when he was dispatched to a possible overdose and CPR in progress. Upon arrival Deputy Norton located a young female, unconscious, behind the residence who was not breathing and was blue in the face.

The family was standing around her unsure what to do. Deputy Norton moved the family aside and gave a dose of Narcan intra-nasal and began performing CPR where he continued alone for approximately 5 minutes until EMS arrive and relieved him.

If not for his quick thinking and actions, this young lady would not have survived. Deputy Norton displayed the highest of standards ideals of the Sheriff’s Office and because of him and his actions, she is still alive today.

More in this category: « Assault with an axe in Friday Harbor Jan. 20 Suspect arrested in Eastsound for spate of burglaries »