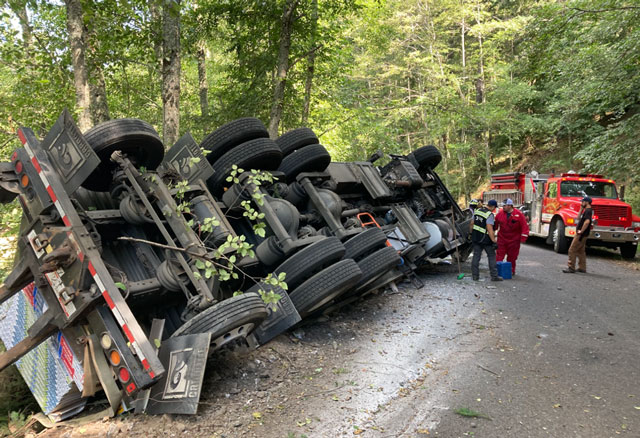 Daniel Ramirez and Julius Escalona delivered some drywall on Buck Mountain Road Saturday, July 23, 2022 and headed to another delivery. According to Ramirez, he was braking as he drove down Buck Mountain Road, a steep paved grade of approximately 20-30 percent. The air brakes stopped working and the truck gained momentum due to its heavy load.

Ramirez was unable to brake any longer. As he went around a slight right curve in the 500 block, he lost control and went off the left side (south side) of the roadway.

Ramirez was bleeding from cuts to his left arm and right hand. He also had an abrasion to the top left side of his head that was also bleeding. He called his boss, the manager of GTS Drywall out of Ferndale. The deputy also spoke with the manager.

The passenger, Julius Escalona, was sitting on a log. The deputy saw that his right arm near the wrist was deformed and swollen. He stated his back was hurting as well. He explained the incident the same as Ramirez did.

The deputy investigated the collision scene. The semi truck was lying on its driver's side, partially off the south side of roadway way. The large amounts of drywall had fallen off the truck after the collision. 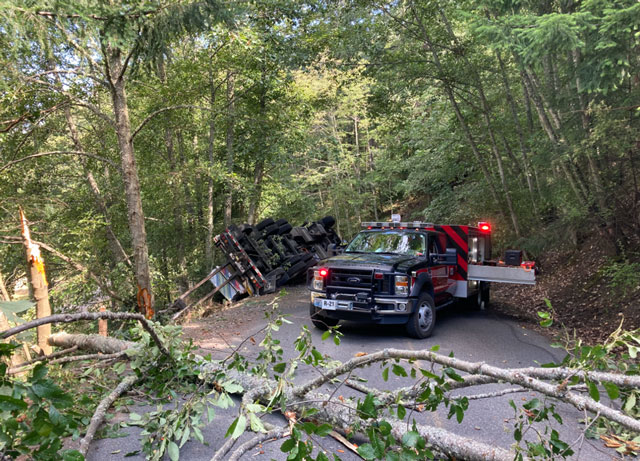 The deputy determined the truck was driving down the hill (in a westward direction) in the 500 block of Buck Mountain Road. He saw tire marks and evidence of braking of the driver's side wheels leaving the pavement onto the dirt shoulder. The truck then slide off the roadway due to the gravity of the steep ravine that was immediately off the shoulder. The truck struck a tree, causing it to fall over on to the roadway behind the truck as it continued westward. The truck then grazed off another tree before coming to stop on its driver side. Some drywall was still on the truck but most of the load fell off the truck and into the ravine.

Orcas Island Fire and Rescue EMS treated Ramirez and Escalona and told the deputy they both would be airlifted to a hospital.

Escalona's spouse had called dispatch and the deputy relayed the information so they could tell her what was happening.

Another deputy arrived on scene, took more photos and helped with traffic control.

Orcas Towing was on scene. Removal of the semi truck had to be scheduled for the next day due to a need for larger equipment and experienced personnel to properly complete the work.