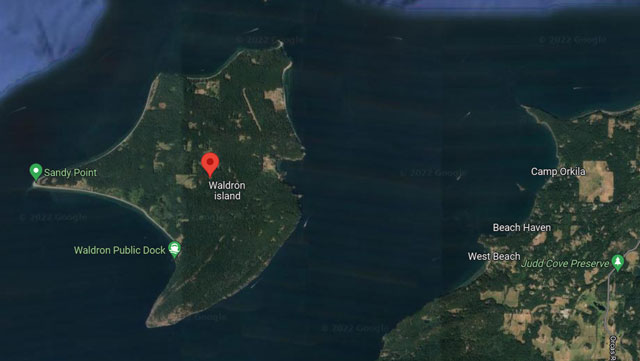 Twenty-five years ago yesterday, August 19, 1997, a raid on Waldron Island made headlines  globally.

"Waldronites awoke early one morning in August 1997 to find a 35-person landing force armed with rifles, dressed in flak jackets and camouflage, creeping across their island, pounding on doors, slapping on handcuffs. Federal and county agents had arrived by barge under cover of night to round up a handful of marijuana growers. That they did--along with 850 mature plants seized from six parcels." -"Private Lives" by Barry Siegel, Los Angeles Times.

An article, "Trouble in an Island Paradise" by Candy Hatcher of the Seattle Post-Intelligencer is a comprehensive overview of the raid. "The raid ultimately netted six convictions, but it has also spawned conspiracy theories and challenged the islanders' right to privacy. One man's case has been overturned on constitutional grounds. The chief prosecutor has reopened his investigation after a key witness recanted. And the privacy issue is headed to the Washington State Supreme Court for review. "

From "Private Lives": Eventually the landing force located its intended prey: 570 plants on Kim Gordon and Katrina de Rafael’s land; 139 on Dennis Holmgren’s; 118 (and a rifle) on Timothy Quigley and Ivan Moorhouse’s; 100 (and six guns) on Betty Ledbetter’s.

"The team assigned to Bob Schmoker reached his house at about 6:30 a.m. In their affidavit for a search warrant, they’d outlined what they expected to find at a main dealer’s base: trip wires tied to sounding devices and explosives, watchdogs, firearms, false walking paths, multi-frequency scanners and large amounts of cash. Crouching now behind a pickup, shouting through a bullhorn, they ordered Schmoker outside. Half awake, in his underwear, Schmoker looked out a window at a sea of DEA agents.

"Although authorities publicly valued their haul at more than $1 million, other local estimates put its net worth at less than $100,000. Only Kim Gordon and Katrina de Rafael, with their 570 plants, landed in federal jurisdiction; Gordon was sentenced to 18 months in prison, de Rafael to three years of supervision. Dennis Holmgren drew 90 days in county jail, Betty Ledbetter 15 days of house arrest, Timothy Quigley and Ivan Moorhouse probation and a fine.

"Bob Schmoker was never charged with anything."

So 25 years later, Ivan Moorhouse says he has had his felony for organic gardening expunged and his right to own firearms restored. He contacted the Sheriff's Office to retrieve his Chinese SKS Assault Rifle. The following emails explain his fruitless efforts and his frustration.

The emails are posted from newest to oldest.

As you can see from the correspondence [posted below] from your undersheriff and your property room manager, you all seem to have lost my Chinese SKS assault rifle that you stole from me when you raided my property on Waldron island. I have since had my felony expunged, my right to own firearms restored and I would expect to have my property returned intact.

The undersheriff seemed to think that it may have been sold at some sort of auction. Why would San Juan County be re-introducing cheap assault rifles into society at a time of mass School shootings? It seems wrong and immoral for such a wealthy county so be doing, if it did happen?

The property room manager seems to still be looking for it while Anthony in dispatch assured me you had it on site, meanwhile the undersheriff says it was sold at auction. Where is the paperwork?

I look forward to a resolution on this missing rifle.

I am also hoping that you can expand State v. Blake refunds?? I paid $10,000 on fines in 1997 when I was 27 years old, you all tried to ruin my life and I deeply look forward to apologies and reparations including interest.

It is sad to see how you so vehemently prosecuted Cannabis cases while your islands are now infested with Methamphetamines and Heroin.

I guess it is hard for Neo-liberals to tell the difference between good and bad?

Thanks for your time and have a wonderful day!

Thanks for a response.

I did not say “that all you do is lie and kill black people”. After you told me that Jeff Asher would also likely lie to you if you asked him about my missing SKS rifle, I stated “ that police have a national reputation right now for racism and dishonesty”, at which point you hung up on me.

I am sorry if you happened to, in semi retirement, join a profession that is rife with failure and disappointment Nationally. It is no reason to deny it or hang up on a taxpayer.

I appreciate your continuing to look into this after nearly a year of coming up with nothing. A year is a long time to be searching whatever SJ county has for storage facilities.

It is odd that you still have no leads on my rifle as Anthony in dispatch told me that you have my rifle 2 days ago and then this morning the undersheriff indicated that the rifle was sold at auction, but he provided no receipt, date of sale or any other pertinent paperwork that I would need to prove that the SKS Chinese paratrooper assault rifle is no longer in my care.

Why the county would sell cheap assault rifles at auction for a profit is beyond me. Especially in times of mass school shootings, seems morally wrong to me… If it was sold, I expect to receive the proceeds. Otherwise you all can explain to the media as to why you reintroduce cheap assault weapons into society…??

I am confused because I have now received three different responses as to the whereabouts of my rifle from three members of dept?

Thank you for your assistance.

This is a follow up to our phone conversation of 8-16-22 regarding the firearm you believe we have in our possession.

As stated previously, we have no weapons in the property room matching your description, or from the case you referenced.

Despite your stating that all I do is lie and kill black people, I will continue to research the case and firearm in question.

If I discover anything that leads to a different conclusion, I will contact you.

Can you please send me receipt of the sale of the Chinese SKS at auction and send me a check for the proceeds?

Until I see that the rifle has been taken out of my name, I cannot let this issue lie.

Who was the buyer? and why would the county resell an assault rifle?

I have been informed by our Evidence Technician that you have inquired about a firearm from a 1997 VUCSA case. As you have been told previously, our computer records do not go back that far, and paper records are not usually kept for twenty-five years.

We have spent considerable time and effort researching your request. After your last conversation with our technician, we were able to locate a reference to a firearm matching your inquiry.

That firearm was cleared for disposition and sent to an auction house for sale, as approved by Washington State RCW.

Editor's Note: Attempts to reach Sheriff's Office staff for comment was unsuccessful probably due to the Fair. More attempts will be made.