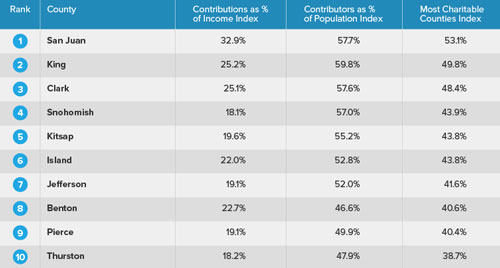 According to SmartAdvisorMatch.com, San Juan County residents are the most generous in Washington state with 57.7 percent making charitable donations. The donations equal 3.9 percent of the residents' income.

Two factors were reviewed: how much people donate as a percentage of their net income, and the proportion of people in a given county who made charitable donations.

To determine the amount that people donate as a percentage of their income, the company first had to calculate people's net income. To do this, they looked at tax return data and subtracted total taxes paid, mortgage interest, mortgage points and mortgage insurance payments from total income to get each county's net income. They then divided each county's total charitable donations by its total net income to see how much county residents are donating relative to their income.

The results were then indexed and the two factors equally weighted to yield their most charitable counties score.