The charges are the first under the Washington Animal Trafficking Act (WATA), which was created by voter-approved Initiative 1401. More than 70 percent of Washington voters approved I-1401 in 2015. The law took effect in 2016. WATA makes it a felony to sell, purchase, trade or distribute parts of specific endangered or vulnerable species of elephant, rhinoceros, tiger, lion, leopard, cheetah, pangolin, marine turtle, shark or ray.

“Washington voters sent a clear message that trafficking in items made from these endangered species will not be tolerated,” Ferguson said. “Traffickers are on notice — you will be prosecuted.”

“My Department’s police officers and staff work every day to stop illegal trade in both local and international wildlife, ensuring that species populations continue to grow and thrive for generations to come,” said Washington Department of Fish & Wildlife Director Kelly Susewind. “Working together to enforce this law sends a clear message that we will not tolerate poaching or trafficking of products from threatened or endangered species.”

“Illegal poaching and trafficking is decimating wildlife species across the globe, and we applaud the Attorney General’s Office for filing these criminal charges under our state’s new animal trafficking law,” said Dan Paul, the Washington senior director for the Humane Society of the United States. “Today’s charges demonstrate our state’s commitment to protecting endangered wildlife at home and abroad.”

“The billion-dollar black market trade in endangered species is propelling iconic animals towards extinction,” said Woodland Park Zoo President and CEO Alejandro Grajal. “When Washington voters took a stand against illegal wildlife trafficking by passing I-1401, they provided more than hope — they gave teeth to enforcement measures allowing us to stop this practice in our state. Ending wildlife trafficking here will have ripple effects throughout the entire world and help us save species in the wild. We applaud the Attorney General’s efforts to punish those who profit from the senseless killing of endangered animals.” 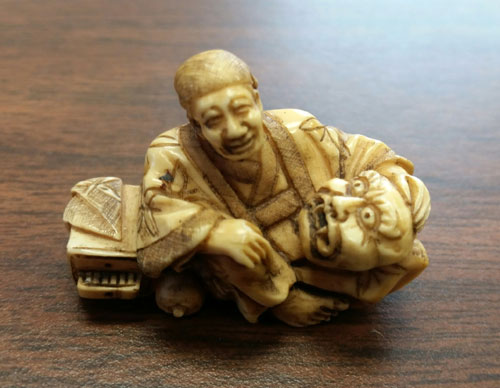 One of figurines sold by Rooney.

In late 2017, Washington Department of Fish & Wildlife (WDFW) detectives contacted Rooney after reviewing online listings for items they believed may contain elephant ivory. The detective went to Rooney’s home, and observed dozens of items that possibly contained ivory. The detective purchased three items (one pictured at right) believed to contain elephant ivory, which genetic testing confirmed. Officers later executed a search warrant on his home, and, as a result, are holding more than 1,600 additional items they suspected may contain ivory. Rooney was charged today in Snohomish The figurine sold by Chen.County Superior Court.

In a separate investigation, WDFW detectives contacted an out-of-state buyer who allegedly purchased a figurine (pictured at right) they suspected may contain ivory from Chen for more than $1,300. Genetic testing confirmed the statue contained elephant ivory. Chen was charged in King County Superior Court today.

The charges contained in the complaints are only allegations. A person is presumed innocent unless and until he or she is proven guilty beyond a reasonable doubt in a court of law.

First-degree unlawful trafficking in species threatened with extinction is a Class C felony punishable by up to 5 years in jail, a $10,000 fine and a $4,000 criminal wildlife penalty paid to the WDFW to help fund future enforcement.

Attorney General Ferguson created the Counsel for Environmental Protection in 2016 to protect our environment and the safety and health of all Washingtonians.

Under WATA, it is a felony to sell, purchase, trade or distribute parts of specific endangered or vulnerable species.

It is not illegal to possess these items if they were obtained before WATA passed. WATA contains exceptions for some antiques and musical instruments. It also allows for the inheritance of covered items, and allows those who possess items covered by the act to transfer them to a museum or college for educational or scientific purposes. More information about the Washington Animal Trafficking Act is available here.

WDFW detectives investigate potential violations of WATA. The U.S. Fish & Wildlife Service performs genetic testing of items that may violate the act, as well as assisting WDFW in some investigations.

On Saturday, April 6, the Woodland Park Zoo is hosting an event in conjunction with the WDFW to offer a secure and legal way to donate items made from endangered animal parts. WDFW officials will be on hand at the zoo between 10 a.m. and 2 p.m. to accept donated items covered by the Washington Animal Trafficking Act.

Attorney General Ferguson will join representatives from the zoo and WDFW at a press conference to share more information about the event, dubbed “Toss the Tusk,” beginning at 11 a.m. on Wednesday, April 3, at the Woodland Park Zoo. More information on “Toss the Tusk” is available here.