Ten more counties, including San Juan County, meet the updated criteria to apply for a variance to move into Phase 2.  Gov. Jay Inslee  announced the new criteria and the 10 counties on May 19, 2020. 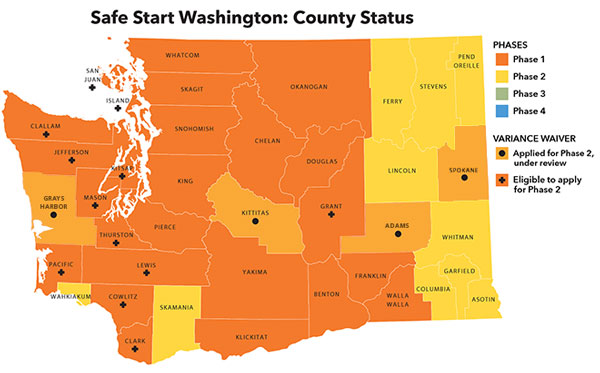 As of May 21, Cowlitz, Grant, and Pacific counties are now eligible to submit a variance application to move into Phase 2 of Gov. Jay Inslee’s Safe Start plan. on May 19,  Adams, Clallam, Clark, Grays Harbor, Island, Jefferson, Kitsap, Lewis, Mason, San Juan, Spokane, and Thurston counties were considered eligible to ask for a variance.

The new criteria are similar to the guidance released by the CDC for reopening regions nationwide. Increasing the counties eligible for variance will allow for increased economic activity around the state while also prioritizing the health and safety of workers and customers to limit the spread of COVID-19.

As of Monday, 10 counties had already moved into Phase 2. Twenty-five counties in the state are eligible in total.

Read the rest of the story on the governor's Medium page.