Washington state House of Representatives is considering a bill, HB 1067, that would name the only dinosaur found in the state as the official dinosaur. In May 2012, paleontologists  from the Burke Museum of Natural History and Culture in Seattle, discovered a portion of an estimated 80 million-years-old left femur of a therapod dinosaur at Sucia Island state park in the San Juan Islands. 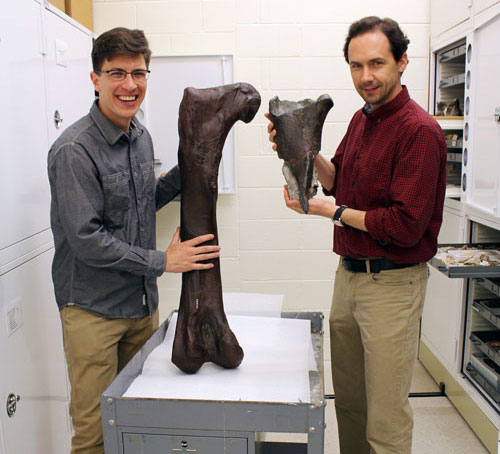 According to the proposed legislation, Therapods are bipedal carnivorous dinosaurs that include Tyrannosaurus and Velociraptor. While scientists are unsure exactly what type of therapod the fossil belongs to, evidence suggests it may be a species similar to Daspletosaurus. The dinosaur has been nicknamed Suciasaurus rex.

Dinosaurs are not usually found in Washington because of its proximity to an active tectonic plate boundary and the high degree of human development. Some scientists believe the Suciasaurus rex lived somewhere between Baja California, Mexico, and northern California, and its fossil traveled to Washington along with a portion of the western edge of North America that was displaced to British Columbia in the Late Cretaceous period, but the fossil's exact location of origin remains controversial.

Dinosaur fossils are rare in the Pacific Northwest because active tectonic plate boundaries nearby have resulted in significant geological turmoil. In addition, the dense development of cities in Western Washington has curtailed scientists' ability to dig for fossils.

Washington has previously designated the Columbian mammoth as the state fossil. According to many scientists, the state bird—the willow (or American) goldfinch—is also considered a type of theropod.

The idea for this bill came from Elmhurst Elementary School in the Franklin Pierce School District. Students in Ms. Cole's classroom learned that another class had introduced a bill for the state insect, so in honor of their teacher's love for dinosaurs, they researched the issue and selected a state dinosaur.

House staff say this bill is about more than a dinosaur; it is the formal recognition of and appreciation for the hard work and creativity of the students, and it is an example of the power of civic engagement. The bill passed the house with 91 "yeas" last session.

State symbols instill pride and ownership in state citizens and allow Washingtonians to identify with the area they call home. Suciasaurus rex is just a nickname for the dinosaur, as scientists do not have enough of the specimen preserved to determine its genus and species. But the Suciasaurus rex is certainly a carnivore, and carnivores are the best kind of dinosaur