California, Oregon and Washington will continue to be a safe haven for all women  seeking abortions and other reproductive health care services in these states. 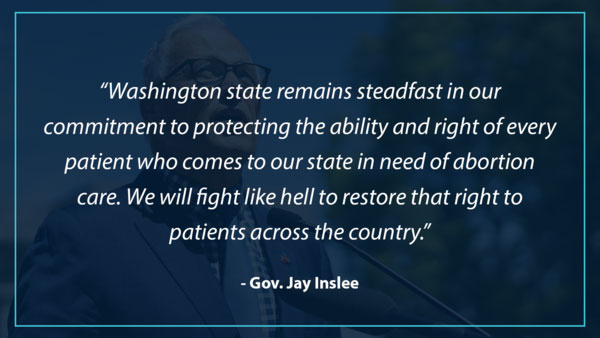 PRESS RELEASE: On Friday morning, the Supreme Court of the United States overturned Roe v. Wade in a 6-3 ruling in the case of Dobbs v. Jackson Women’s Health Organization. The reproductive rights of patients in more than half the country, and 49 years of durable precedent, have been swept aside. Abortion is no longer a constitutional right but instead left to the whims of state politicians.

In response to the ruling, Gov. Jay Inslee joined with the governors of California and Oregon to launch a Multi-State Commitment to defend access to reproductive health care, including abortion and contraceptives, and committed to protecting patients and doctors against efforts by other states to export their abortion bans to our states.

The West Coast governors issued a video message on Friday to affirm their shared commitment to protecting abortion rights. Inslee will hold a press conference with state legislators on Saturday to discuss additional actions the state will pursue to strengthen legal protections and access to care.

The governors of California, Oregon and Washington today issued a Multi-State Commitment to defend access to reproductive health care, including abortion and contraceptives, and committed to protecting patients and doctors against efforts by other states to export their abortion bans to our states.

This Multi-State Commitment affirms the governors’ commitment in response to the U.S. Supreme Court’s unprecedented decision to strip away a constitutional right that has been in place for half a century, leaving abortion regulation to the states. The sweeping decision means that for patients in more than half the country, home to 33.6 million women, abortion care is illegal or inaccessible. In a video message the governors share a powerful message that the West Coast will remain a place where reproductive health care will be accessible and protected.

A copy of the Multi-State Commitment to Reproductive Freedom can be found here.

“The law remains unchanged in Washington state, but the threat to patient access and privacy has never been more dangerous. Even in Washington state, Republicans have introduced about 40 bills in the past six years to roll back abortion rights and access to reproductive care,” said Governor Jay Inslee. “The right of choice should not depend on which party holds the majority, but that’s where we find ourselves. More than half the nation’s population now lacks safe access to a medical procedure that only a patient and their doctor can and should make for themselves. Instead, law enforcement, vigilantes and judicial systems can force patients to bear the burdens of forced pregnancy and birth. Washington state remains steadfast in our commitment to protecting the ability and right of every patient who comes to our state in need of abortion care, and we will fight like hell to restore that right to patients all across the country.”

“The Supreme Court has made it clear – they want to strip women of their liberty and let Republican states replace it with mandated birth because the right to choose an abortion is not ‘deeply rooted in history.’ They want to turn back the clock to a time when women had no right to make decisions about their own bodies, when women had to seek care in the shadows and at great danger, when women were not treated as equal citizens under the law. This is another devastating step toward erasing the rights and liberties Americans have fought for on battlefields, in courthouses and in capitols. This is not the America we know – and it’s not the California way,” said Governor Gavin Newsom. “California has banded together with Oregon and Washington to stand up for women, and to protect access to reproductive health care. We will not sit on the sidelines and allow patients who seek reproductive care in our states or the doctors that provide that care to be intimidated with criminal prosecution. We refuse to go back and we will fight like hell to protect our rights and our values."

“Abortion is health care, and no matter who you are or where you come from, Oregon doesn’t turn away anyone seeking health care. Period. Let me be clear: You cannot ban abortion, you can only ban safe abortions — and this disgraceful Supreme Court decision will undoubtedly put many people’s lives at risk, in addition to stripping away a constitutional right that disproportionately affects women and has been settled law for most of our lifetimes,” said Governor Kate Brown. “For all the Americans today feeling scared, angry and disappointed — for everyone who needs an abortion and does not know where they can access safe reproductive health care –– please know you are not alone, and the fight is not over.”

Over the past several years, each state has taken action to expand access to reproductive health care in preparation for just such a decision:

In 2018 Governor Inslee signed the Reproductive Parity Act that requires all health plans that include maternity care services to also cover abortion and contraception. In 2021 he signed the Protecting Pregnancy Act that allows doctors who practice in Catholic-run hospitals to bypass ethical-religious directives and provide medically necessary abortion when a woman’s life is in danger. Earlier this year Inslee signed the Affirm Washington Abortion Access Act that better ensures the ability of Washington abortion care providers to serve any person who comes in Washington state seeking an abortion. Washington law also protects patients and clinic personnel from harassment outside of clinics. Further, when federal changes were made to the Title X program to not allow family planning clinics to reference abortion as an option, Washington state stepped up to fund the Title X clinics instead of having to comply. While the federal funding has been restored, the state will continue to provide needed funding to support access to abortion.

Governor Newsom has proposed a $125 million Reproductive Health Package to expand access for women and help prepare for the influx of women seeking reproductive health care from other states. The California Legislature has introduced a constitutional amendment to enshrine the right to abortion in the state constitution, Governor Newsom recently signed legislation eliminating copays for abortion care services and has signed into law a legislative package to further strengthen access and protect patients and providers. Additional proposals are being considered with the Legislature.

Oregon led the nation by passing the most comprehensive reproductive health legislation at the time. Governor Brown signed Oregon’s Reproductive Health Equity Act into law in 2017 — a first of its kind bill that expanded access to reproductive health services for all Oregonians and codified the right to an abortion into state law. Adding to that work, Oregon invested $15 million for community-based organizations to expand access to abortion across the state and provide immediate support to patients, health care providers, and community advocates, with a focus on rural communities, communities of color, and low-income communities to overcome barriers to access.