2003 and 2004 violent home invasion sexual assaults in Pullman, WA; and

Before Ferguson’s office got involved, these cases did not have active leads. The DNA profiles had been uploaded to CODIS, the national criminal DNA database, with no results.

On July 8, a Grays Harbor County Superior Court judge sentenced Paul J. Bieker to 30 years in prison for the 2003 abduction and rape of a teenage girl. After a three-day trial, a jury convicted the 51-year-old of felony rape in the first degree with deliberate cruelty. The case was the first conviction and sentencing resulting from funds the Attorney General’s Office provided for forensic genetic genealogy research to help solve a sexually motivated cold case.

On the same day, Kenneth Downing pleaded guilty in Whitman County to four counts of rape in the first degree and one count of assault in the second degree with sexual motivation. Downing committed two Pullman home invasions in 2003 and 2004, both resulting in violent rapes. Forensic genetic genealogy connected Downing’s DNA to the DNA evidence collected from both sexual assault cases.

“This sends a message to survivors that we will not give up on cold cases,” Ferguson said. "My office will continue this initiative to help law enforcement close these cases.”

Ferguson’s forensic genetic genealogy program has assisted with 23 cold case investigations to date. Three cases have been solved with the assistance of this program, and the leads generated by the program may result in future arrests and convictions in the other 20 cases. The program is part of the Attorney General’s Sexual Assault Kit Initiative.

The Attorney General’s Office dedicated $292,275 to assist local law enforcement agencies with felony cold case investigations through forensic genetic genealogy testing. These resources are reserved for unsolved cold cases of felony crimes with a sexual motivation. Moreover, to be eligible, the cases must have no active leads and no CODIS matches. 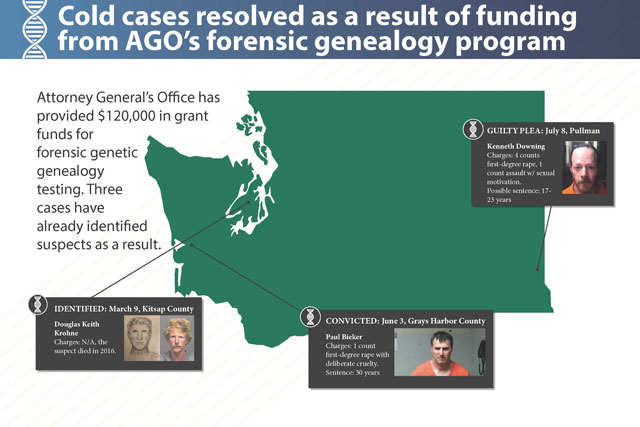 A 2003 rape without a named suspect

The Grays Harbor County Sheriff's Office first investigated the rape of a teenage girl in March 2003. The assailant abducted the girl, then 17-years-old, after she parked her car at home in McCleary, according to the initial 2010 arrest warrant. He taped her head and hands then bound her legs and put her in the trunk of her own car. He drove her to a remote location where he raped her.

He put her back in the car and drove her back to near her home. He told her that if she told anyone about what happened that “her dad would be dead and the house would be burned down and the rest of her life would be miserable.” He cut the ties from her wrist then left her. She was eventually able to drive herself back to her home.

Her father was at home and told law enforcement officers that she had duct tape on her and nylon wire tied around her ankles. He cut the ties then she locked the door and closed the windows out of fear that Bieker was watching them. She told her father what happened and he notified law enforcement.

Police officers examined her and took evidence from her. They compared the genetic evidence to databases available at the time but found no matches.

As there was no suspect at the time, the county issued an arrest warrant for a “John Doe” and the case went cold.

The Attorney General’s Office paid $5,000 to send Bieker’s DNA to a private laboratory for genealogical testing. The main database used by law enforcement, the Combined DNA Index System (CODIS), is limited by only having DNA from convicted offenders. Bieker had no prior convictions, so his information was not in CODIS.

These details provide an active lead for law enforcement to investigate. Information from a genetic genealogy company does not provide grounds for an arrest by itself. Grays Harbor County law enforcement had to independently match Bieker’s DNA to the evidence collected from the crime scene. Grays Harbor County detectives then followed Bieker and collected a DNA sample after he left it at a public location.

The Washington State Patrol Crime Lab confirmed the DNA results were a match to the 2003 crime scene. The match was so solid that a June 15, 2021 motion to the court notes the chances of it not being Bieker were “one in 35 quadrillion.”

Grays Harbor County detectives then arrested Bieker in McCleary and charged him with the 2003 crime.

In 2003, a man broke into a home in Pullman and threatened a woman at gunpoint. He sexually assaulted her three times. At one point, she said the attacker made small talk and asked about her pets. Then in 2004, a man broke into an apartment, where two women were inside. The man, who had a gun, tied up one roommate and raped the other.

Forensic genetic genealogy testing helped match Downing’s DNA to the evidence in both cases. On July 8, 2022, Downing pleaded guilty to four counts of rape in the first degree and one count of assault in the second degree with sexual motivation. A Whitman County Superior Court judge will sentence him on August 19 and he faces a standard sentencing range of between 17 to 23 years in prison.

Also in March, the Kitsap County Sheriff’s Office announced a match for the DNA left behind by the killer of 61-year-old Patricia Lorraine Barnes, who was murdered in 1995. A cigarette butt left at the scene provided a DNA sample, but no matches until forensic genetic genealogy testing in late 2021.

Police found Barnes without clothing and partially covered by a sleeping bag in a ditch in South Kitsap County. She had two bullet wounds in her head. The suspect, Douglas K. Krohne, died in 2016 and law enforcement closed the case.

In recent years, law enforcement and prosecutors have had success solving cold cases using forensic genetic genealogy. This involves a genealogist taking DNA evidence, uploading it to a public DNA database that allows access to its data then using that information to construct a family tree to identify potential suspects who may not themselves have a DNA profile available.

DNA samples in public databases contain more genetic information than those submitted to CODIS and the companies can conduct genealogical research to determine potential familial links to DNA samples — from a third cousin to a brother. The genealogists or law enforcement officers do not have access to specific genetic data, just the results from matches within the database.

Attorney General Ferguson has prioritized clearing the rape kit backlog and improving the state’s response to sexual assault. Through his Sexual Assault Kit Initiative, his office:

Inventoried all unsubmitted kits that were being housed in local law enforcement evidence rooms;

Allocated more than $2.25 million for testing to help clear the backlog;

Launched a website to keep the public up to date and provide comprehensive information about Washington’s SAKI program, part of a statewide initiative to end Washington’s rape kit backlog; and

Worked with local law enforcement to collect DNA samples from hundreds of registered sex offenders that failed to comply with a legal obligation to provide their DNA.