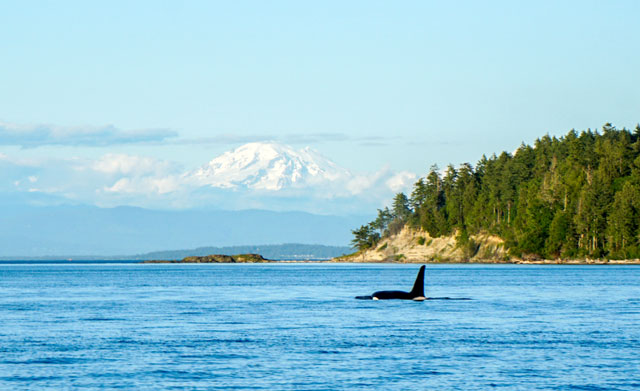 In 2019, Senate Bill 5577 changed how close boaters can get to Southern Resident orcas and implemented a 7-knot speed limit within one-half nautical mile of the endangered orca population. This legislation also prompted the Department to develop a licensing program and rules for commercial whale watching for both motorized vessels and sea kayak tours.

The commercial whale watching rules have been in effect since spring 2021. The legislation directs WDFW to review the rules and produce a report every two years (November 2022, 2024, and 2026) with recommendations for potential modifications.

"WDFW and our partners have been working incredibly hard to implement the Southern Resident Orca Task Force recommendations, including helping to advance recovery for the Southern Residents' preferred Chinook salmon," says Kelly Susewind, WDFW Director. "This report focuses in on the important work of the Department to reduce vessel noise and disturbance so the orca can communicate and find food."

Members of the public can share feedback on the rules through an online public survey, available through Sept. 30, 2022.

The Department is also inviting the public to submit any relevant scientific studies published since 2020, and inviting researchers to share their studies, either underway or completed, that could inform the report. A separate online survey will be open through Sept. 20 to collect any references, data, or studies. If data is still being collected through September, researchers should still complete the survey by Sept. 20 but can send their 2022 field season data to the Department by Oct. 7.

“Now that we’ve all navigated four summers with the new rules for boating around Southern Residents and almost two years with the new commercial whale watching license framework and rules, it’s a great time to pause and reflect on how things are going,” said Julie Watson, Ph.D., WDFW killer whale policy lead. “Robust feedback will be critical to this process and we’re looking forward to hearing from the broader community around this topic.”

Later this fall, WDFW staff will be reviewing comments received as they draft the report, which is due to the Legislature by Nov. 30.

Washington law requires recreational vessels to stay at least 300 yards from Southern Resident killer whales and at least 400 yards out of the path in front of and behind the whales. Vessels must also reduce their speed to seven knots within one-half nautical mile of Southern Residents.

Approved by the Fish and Wildlife Commission in Dec. 2020, the commercial whale watching rules only restrict commercial viewing of Southern Residents and do not further restrict the viewing of Bigg's killer whales, humpbacks, or other species of whales and marine mammals beyond regulations already in place.

Before sending comments, the public is invited to review the state laws on boating near orcas (RCW 77.15.740). For more details about steps recreational boaters can take to keep the whales – and themselves – safe, visit BeWhaleWise.org.

Individuals who need to receive this information in an alternative format, language, or who need reasonable accommodations to participate in WDFW-sponsored public meetings or other activities may contact the Title VI/ADA Compliance Coordinator by phone at 360-902-2349, TTY (711), or email (Title6@dfw.wa.gov). For more information, see https://wdfw.wa.gov/accessibility/requests-accommodation.