On Tuesday May 21, 2019 a San Juan County Superior Court Visiting Judge dismissed all causes of action against the Town of Friday Harbor and Duncan Wilson, the Town’s Administrator, brought by local attorney Carla Higginson on her own behalf and as attorney for A. John Wuebker. The Judge left the case open for thirty days allowing the Town and Wilson to submit motions and briefing for attorney fees. 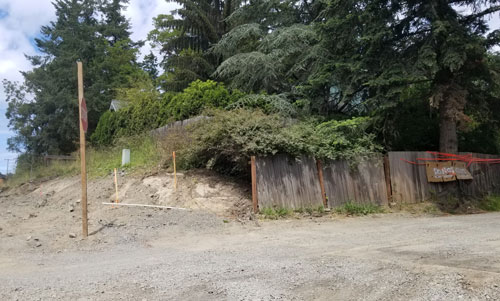 This was the corner of Perry and Tucker that was the subject of Higginson's lawsuit. Photos by Sharon Kivisto 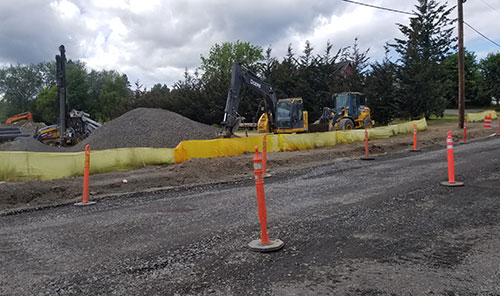 The construction project was delayed because of the lawsuit. Photos by Sharon Kivisto

Judge Cindy Larsen of the Snohomish County Superior Court was assigned this case as a visiting judge. Higginson’s complaint stemmed from the Town’s Tucker Avenue Reconstruction Project. Higginson claimed that the Town was building sidewalks and other improvements on land she owned by adverse possession. Higginson’s Temporary Restraining Order, acquired at the time of filing the Complaint, was later set aside by Judge Larsen. Larsen ordered damages in favor of the Town for construction delays in the amount of $28,151.

Higginson has since appealed that order to the Court of Appeals where it remains pending.

Judge Larsen’s order dismissing the suit altogether was the result of a motion for summary judgment filed by the Town and Wilson, who claimed there was no genuine issue of material fact to go before a jury.

Among the findings in the summary judgment:

"At the outset of this case, Defendants provided evidence that the 15 feet immediately west of Plaintiffs' property was deeded to San Juan County by Kenneth McDonald on July 2, 1894. Plaintiffs' expert initially agreed. This was the parties’ understanding when Plaintiff sought an injunction preventing further construction in June 2018.

"Plaintiffs' expert provided testimony that there were problems with the Defendants' survey, including that it did not identify the plat(s) from which the Tucker Avenue right of way was derived. However, he did not provide an opinion as to who actually owned the disputed property, or even that the town did not own the property.

"Subsequently, the parties learned (and appear to agree) that Tucker Avenue was, in fact, created by dedication in Gould's Second Acre Addition to Friday Harbor (Gould's Plat). This has been established by the evidence provided by the Defendants. However, no survey of Tucker Avenue as it relates to Plaintiff's property has been provided to the court since the  discovery that it was created by Gould’s Plat.

"Defendants have submitted, however, the Third  Declaration of Robert Anderson, which states, “Based on my knowledge, training, experience and extensive research of the property records, the Tucker Avenue right-of-way abutting the west side of the parcel in question was created by dedication on the face of the Gould Second Acre Addition to Friday Harbor Plat on March 30, 1906, as recorded in Volume 1, page 6 of Long Plats in the Auditor's records of San Juan County.” (emphasis added).

"This, when taken in conjunction with the First and Second Declarations of Robert Anderson and exhibits attached thereto, and the exhibits admitted at the hearing on motion for summary judgment, creates an affirmative showing that the disputed property along Tucker Avenue is part of the right of way owned by the Town and has belonged to the county or the town since the early 1900s."

“We are very glad to have this matter behind us” said Mayor Farhad Ghatan. “We never believed there was any validity to the claims being made by Plaintiffs”.

The Town was represented by attorneys Eileen Keiffer of Issaquah and Amanda Butler of Seattle.