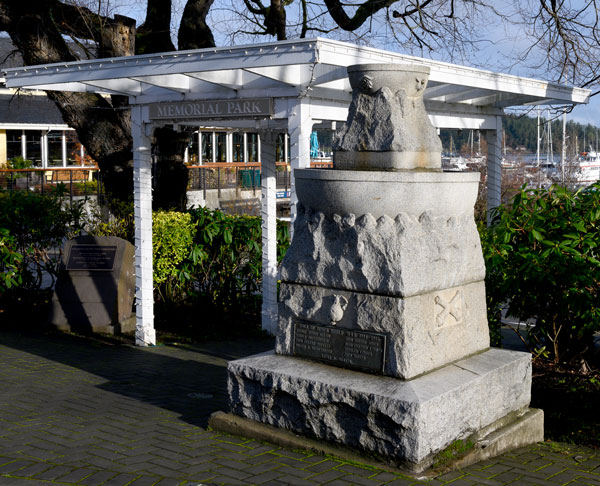 On Armistice Day November 11, 1921, the first memorial monument in Washington state  honoring WWI soldiers was dedicated in Friday Harbor. One hundred years later, the gray granite Memorial Monument remains a poignant reminder of the sacrifices made by islanders in the Great War. 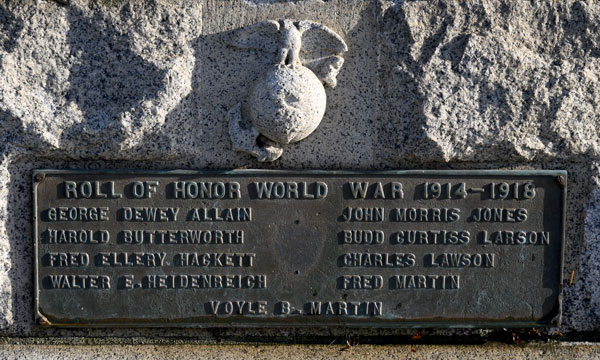 Residents and visitors pass the granite Memorial Monument in Memorial Park at the foot of Spring Street when they arrive on San Juan Island. Most likely aren't aware of the monument's history or the details engraved on the monument. The names of the nine island men who died in WWI  are on a bronze plate. On the four sides, below the bowl, is carved the insignia of the four branches of the military service: the Navy, the Marine Corps, Artillery and Infantry. 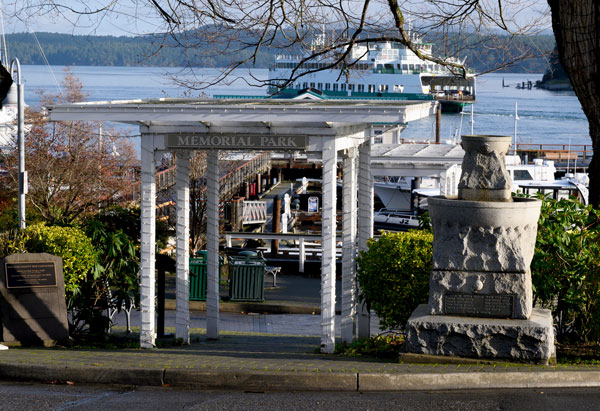 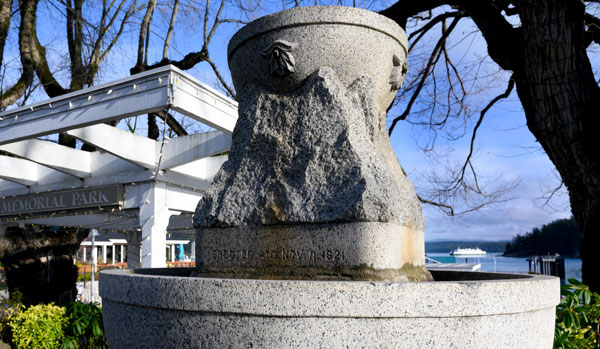 The dedication date is engraved on the monument. In the century since it was dedicated, the Memorial has been the centerpiece of island gatherings at Memorial Day and Veterans Day. 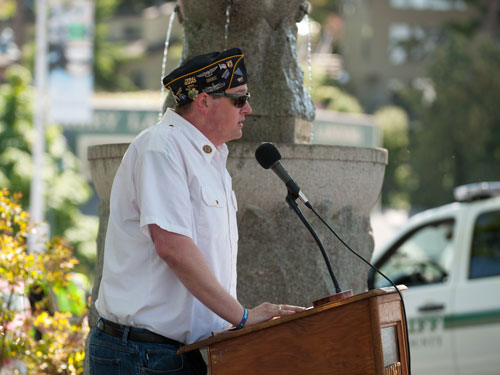 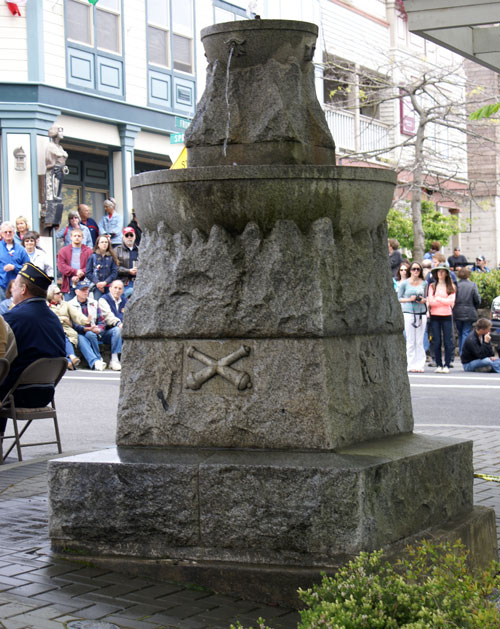 The following text is from the article "Memorial Monument Unveiled - First in the State - An Auspicious Occasion" which is on  display in the county Courthouse. To learn more about how county residents were effected by and contributed to the war effort visit http://www.historylink.org 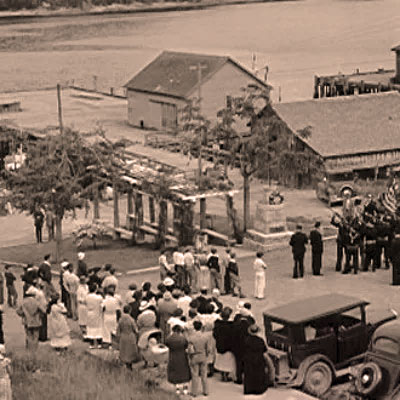 Memorial Monument Unveiled - First in the State - An Auspicious Occasion

The Armistice Day exercises, held in Friday Harbor, Friday afternoon, were a huge success under the direction of Hackett-Larson Post American Legion. The main feature of the occasion was the unveiling of the memorial monument in the little park at the foot of Spring Street, in honor of the county's soldier dead of the late war.

A notable fact is that this monument is the first in the way of a monument to be erected in the State of Washington as a memorial.

This beautiful monument represents an expenditure of $1,500 and while practically everyone in the county contributed to the fund, the credit for erection rests with the Women's Study Club of Friday Harbor, who first proposed the erection of such a memorial and gave their first entertainment during the month of February, 1918, for this purpose.

The women of this organization have worked faithfully and diligently for the success of the movement and they are certainly entitled to a vote of thanks from the people of San Juan County for their labors.

The monument is made of British Columbia granite and was furnished by the Puget Sound Marble & Granite Co. of Seattle. It is of a fountain effect, standing nine feet high on a base 4 1/2 feet square. On the four sides, below the bowl, is carved the insignia of the four branches of the military service, namely: the Navy, the Marine Corps, Artillery and Infantry. On one side is a bronze plate containing the names of the nine boys who gave their lives in the service of their country, who are as follows: 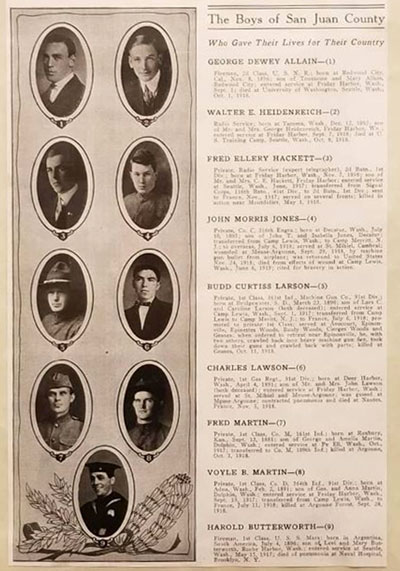 Fred Ellery Hackett, killed in action near Montididier, France, May 1, 1918.

John Morris Jones, wounded at Meuse-Argonne, September 9, 1918 and after return died from effects of the wounds at Camp Lewis, June 6, 1919.

The State of Washington is credited with 606,000 men and women who entered the military service out of this the dead is approximately 1,800 or 3 percent. San Juan County's portion in this service was 133 men and two women and with nine deaths makes the percentage of death approximately 6 1/2 percent, which indicates that San Juan was one of the hardest hit counties in the state as a result of the war.

After a few brief remarks by Prosecuting Attorney Samuel R. Buck, Mayor F. E. Kirby introduced the speaker of the day, Captain Charles A. Turner, commission of public safety in the city of Everett. Captain Turner served in the ranks during the Spanish-American war and during the late war held a commission as captain of the air service. After paying a brief tribute to the ladies of the Women's Study Club for their work in raising funds to erect a memorial to the soldier dead of the late war.

Mr. Turner opened his remarks by briefly addressing the members of the G.A.R. and before continuing with his address he requested Geo. Smith, a veteran of the sixties to take a seat of honor on the platform. At the opening of the rebellion Mr. Smith was one of the recruits aboard the Str. "Star of the West" bound from New York to Fort Sumter when the vessel was fired upon by the rebels and forced to return to New York.

The speaker in the course of his remarks said that the truth contained in the remarks of the G.A.R. speakers on Memorial day regarding the horrors of war has been brought home be the late world cataclysm to nearly every home in the land, and made a special appeal for support to President Harding's disarmament congress where its members know personally what war means. And reiterated that war and its cost to Nations in human life, pumping the youngest and best from our national reservoir of life, has besides much sorrow and suffering, a burden of debt and taxes and an aftermath.

In expressing appreciation of the work to the Red Cross, Capt. Turner recited an experience in his own case in 1917, when the Red Cross furnished his own men with sox and sweaters at a time when the army headquarters department was unable to supply his wants.

To the members of the American Legion he remarked that they own a duty to their disabled comrades and to their country and urgently admonished them to see that proper mean and put in public office and aid them in their work, rather than discourage them by too much complaint without suggesting a better way of conducting the country's business.

Continuing the speaker said, "Do not expect to make things right by passing more laws, the country is suffering from legislative indigestion now. What we need is not more laws, but better enforcement of present laws. Good citizenship demands of the individual that he do his share toward government by electing properly qualified men and women to conduct the public business."

Concluding his remarks Captain Turner unveiled the beautiful granite monument dedicated to the memory of the San Juan County boys who made the supreme sacrifice.

More in this category: « Northwest artist creating sculpture of Friday Harbor founder Edward Warbass and his dog Bob The lights are on in Friday Harbor »