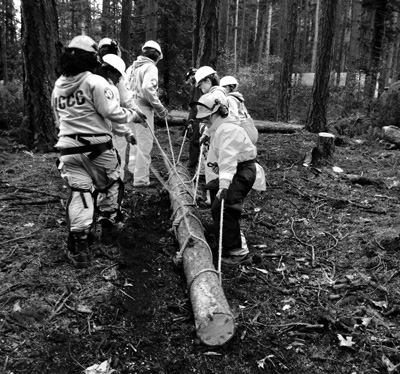 An AmeriCorps National Civilian Community Corps (NCCC) team has hit the ground running this week, providing aid to Orcas’ Camp Orkila. The team, Gold One, will be working at Camp Orkila from November 9 through December 18, 2015.

Orcas’ Camp Orkila has been serving youth from YMCA of Greater Seattle and beyond since 1906. The camp receives roughly 17,000 campers each summer and is widely regarded in the community for its dedication to excellence in outdoor education. A paradise for inner-city youth, the camp sits upon an impressive 200 acres of land that is maintained by the generosity of donations, and funding from several endowments. This is the third year an AmeriCorps NCCC team has served at the camp.

The team is assisting the camp in facilitating their forestry management plan by clearing rotted and potentially dangerous trees from their heavily visited grounds. Supervised by Rich Harvey, of Harvey Logging Company, this team of 10 young adults from across the country will implement fire mediation and sustainable forest practices throughout the duration of their stay.

The NCCC team is hard at work clearing out hazardous trees which are either dead or diseased that linger close to the camp’s well-traveled paths. Not only are these steps necessary for the health and wellbeing of campers and staff but also for the overall ecological health of the forested areas. Supervising the group, Rich Harvey, has emphasized the importance of understanding Silviculture – the practice of controlling the establishment, growth, composition, health and quality of forests – as the team conducts its work over the next six weeks.

Gold One’s Team Leader Robert Keen, a Sacramento native and environmental enthusiast, is confident that the team will be able to meet the tasks set before them, “The work our team is doing here at Camp Orkila is both strengthening the forest ecosystem and making the surrounding nature safer for future campers. Our site supervisor Rich Harvey has been a great resource in teaching us how to be responsible stewards of a healthy forest.”

The team will continue to learn more about the natural environment of the Island as their work at Camp Orkila continues to progress over the coming weeks.