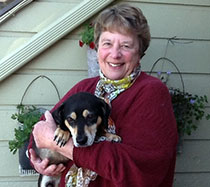 While you may have seen Lori Stokes and her dog Barlow around town or at Eddie and Friends Dog Park, chances are you don’t know the long tale behind their happy-ending story.

The now four-year-old dog first lived with a homeless man on the streets of Los Angeles. After being hit by a car and treated for a broken leg, Barlow ended up in an animal shelter in Oregon.

The Oregon shelter wasn’t a no-kill shelter, so Elizabeth Farr, a volunteer at the Animal Protection Society of Friday Harbor brought Barlow to San Juan Island in hopes he would get adopted. FH APS does not euthanize pets.

Within a few days, Barlow was adopted. Unfortunately a couple of months later, his new owner dropped dead of a heart attack and was not found for two weeks. When a deputy came to the house to check on the man,  the traumatized dog ran off.

The deputy, who returned several times to try to catch the dog, finally called the shelter for help. Shelter staff member Lonnie Wood sat down on the ground and called gently to Barlow who ran right to her.

Wood took Barlow back to the shelter. A few days later the deputy adopted the dog. The happy ending was short, the deputy’s wife was allergic to Barlow.

The deputy’s parents decided to take the dog. But then the mother had a stroke and the decision was made that having a new dog was too much for the couple to handle. Barlow went back to the shelter.

In the meantime, Lori Stokes was mourning the recent loss of her dog. Friends encouraged her to go to the shelter but she was reluctant to do so. Two of her friends went separately to the shelter and each one saw Barlow and thought he was the perfect dog for Lori. She received calls and the same advice from both of them.

At the shelter it was love at first sight for Lori and  a happy ending for the homeless pup.