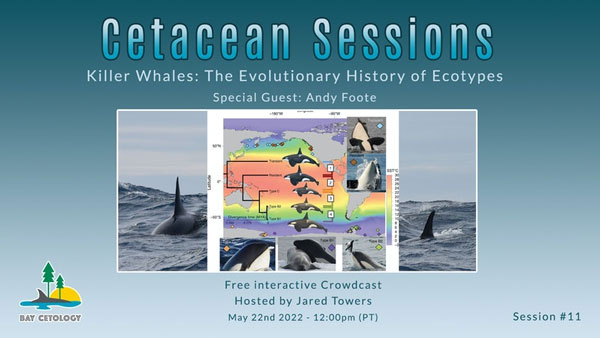 On Sunday, May 22 at 12 noon in Cetacean Session #11, Andy Foote will provide an overview of the evolutionary history of killer whale ecotypes and touch upon some of his latest work including the article “Runs of homozygosity in killer whale genomes provide a global record of demographic histories” recently published in Molecular Ecology. Presentation and discussion will be followed by live Q&A with the audience.

For viewing/participating we recommend earbuds/headphones and the use of Chrome or Firefox.

Cetacean Sessions is a weekly seasonal webinar series where we discuss impactful recently published scientific research on cetaceans with those conducting it around the world. Season 2 is focused exclusively on recent advances in killer whale science. Cetacean Sessions is informal, educational, interactive and geared towards those working with or interested in cetaceans. You can register for sessions and follow our channel for free with no account creation necessary.

Andy is an evolutionary biologist, primarily using genomics to better understand the evolutionary processes underpinning adaptation and speciation. Andy's first taste of killer whale research was working as a volunteer at Orcalab in 2000. Inspired by his experiences there, Andy started going to the British Library after work to access scientific papers on killer whales and develop a research proposal, which he then undertook as a part-time research masters 2002-2005, studying the evolution of killer whale vocal dialects, working primarily with the Southern Residents from San Juan Island. He obtained a scholarship from Aberdeen University to undertake a PhD on population structure of killer whales in the North Atlantic. That led to increasingly working with genetics and the start of a collaboration with colleagues at the University of Copenhagen and with Southwest Fisheries Science Center, which continues today. Over the past decade, Andy has led the consortium that sequenced the first killer whale reference genome and generated the first population genomic datasets. These data provide the basis for his reconstruction of the evolutionary history of present-day killer whale populations, which remain the focus of his research work on killer whales.

Bay Cetology enables conservation and understanding of cetacean populations that are data deficient or threatened by climate change and human development. Our marine biologists and research technicians use various expertise to conduct field studies, analyze data, and communicate findings. Bay Cetology was founded by Jared Towers in 2017 and is based out of Alert Bay (Home of the Killer Whale) in the unceded traditional territory of the ‘Namgis First Nation, British Columbia, Canada. See more about our previous work and current projects at https://baycetology.org