San Juan County District Court Judge Pro-tem Don Eaton determined that government misconduct had taken place during Dustin Schibel's trial this week. On Saturday, February 2, 2019, the Judge dismissed the case against Dustin Schibel who had been charged with 4th-degree assault, harassment, and first-degree criminal trespass.  Since the case was dismissed with prejudice, Schibel can't be retried. 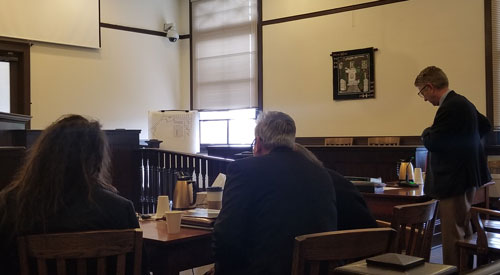 Judge Eaton was notified by county Superior Court Judge Kathryn Loring that the security camera in District Court was zooming in on documents. She happened to notice the action on a monitor next to her assistant's desk. While the jury sat in the jury room, Judge Eaton investigated, viewed the entire day's video and held a hearing for the motion to dismiss. 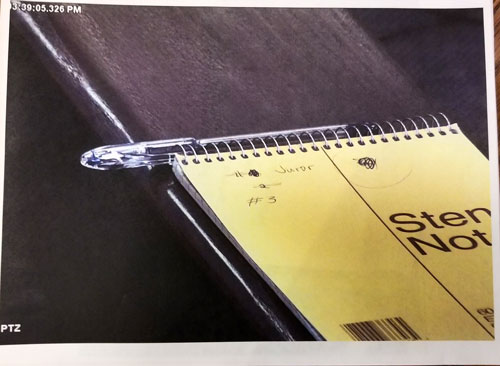 "During the testimony portion of this jury trial Thursday, January 31 the  security camera in District Court was remotely manipulated in a manner that caused it to pan and tilt and zoom from its default setting on four different occasions. It focused closely first of all on the notepad of Juror #3, then panned and tilted and focused closely on an illustrative aid that the prosecuting attorney was using... in respect to jury notebook and prosecutor's exhibit the  words that appeared were clearly legible. Sometime later, the  camera then was manipulated and zoomed directly on typewritten page in a three-ring binder on the  table where prosecuting attorney was seated. Viewing of closeup and screen shot shows several lines of typewritten words. Several of which are  legible, the  vast majority are not. 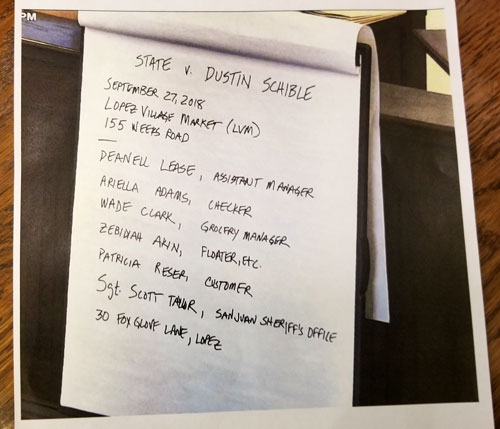 "After camera focused closely on prosecutor's notebook, it zoomed back out and then panned to the left to the defense counsel's table and zoomed down directly on yellow legal pad. Stopped at a point, zoomed in, stopped zoomed in. In process of zooming the focus fluctuated a bit. In addition to handwritten words on the legal pad, also visible was the hand of the defense attorney and the pen she was holding  and  a portion of a typewritten pleading document. Words that were legible on document were the caption... That document is a public document. After lingering on pleading and the handwritten notes, camera zoomed back out and eventually assumed more or less its default position."

Judge Eaton said, "The handwritten notes on the  yellow legal pad,  Court finds those notes are  work product of defense attorney and are therefore privileged and entitled to confidentiality."

It was up to the Prosecutor to show prejudice hadn't occurred. He had to prove beyond a reasonable doubt that no prejudice had occurred.

Judge Eatson said, "The zooming of the camera on the prosecutor's table was done by Sheriff Krebs according to his testimony. His testimony on Saturday suggested he also focused on the  juror's notebook." The Judge said there hadn't been testimony to determine exactly who caused the focus on defense council's notebook but is was clear that it was done by a state actor - either someone in the San Juan County Sheriff's Office or someone in the IT department. "More likely than not all these manipulations were done by someone in the San Juan Sheriff's office  as opposed to someone in the IT department. In either event they were state actors," Judge Eaton said.

Judge Eaton said the actions of the state - manipulating the security camera - violated the defendant's Constitutional rights to a fair trial, including his right to effective assistance of council.

Schibel's conditions of release were immediately lifted. There will be another court proceeding to file the Findings of Fact and the actual dismissal. Schibel is not required to be there.

Still to be determined is if the video recording is to be kept sealed. Prosecutor Randy Gaylord argued strenuously that the public should not be allowed to see it. He cited safety concerns if the public sees how the camera works.

Judge Eaton will hold a hearing at 2 p.m. Tuesday, February 12 in the San Juan County District Courtroom to hear arguments on both sides. He will take comments from the public. Written submissions are also allowed ahead of the hearing.