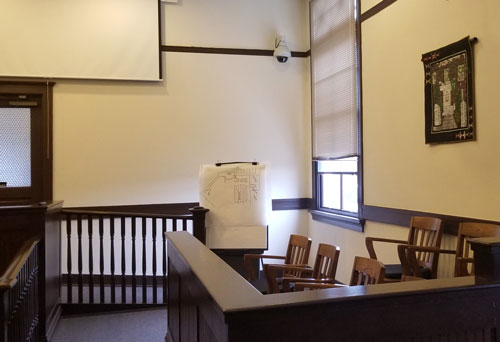 The camera is mounted on the wall near the jury box.

Brandli's brief, which was filed Thursday, February 7 lays out the facts of the case and includes verbatim testimony. Following are excerpts from the brief. The entire brief can be viewed online.

The video footage in question became an issue and an exhibit in these proceedings when it was discovered that, during the trial in this case, someone manipulated the security camera in the courtroom to focus in on the trial notes of Defendant’s attorney. There is one security camera in the courtroom positioned near the ceiling in the far-right corner as viewed from the public’s entrance in the rear of the courtroom. The camera’s image can be viewed from the dispatch room of the Sheriff’s Office and from several other locations in the courthouse. At each viewing location, the video from multiple cameras is displayed on the screen. The operator at each location can choose a camera to fill the entire screen with a single click.

Three cameras at the courthouse have the ability to be panned left-to-right, tilted up and down, and zoomed in and out (PTZ functionality). Two of these cameras are outside of the courthouse. The third is the subject camera in the District Court courtroom. The zooming feature is implemented by the camera’s optics rather than digitally. When these cameras are panned, tilted, and zoomed, the modified image they produce is seen on all of the remote monitors. However, the PTZ functionality is accessible only using special software, which is typically accessed only from the dispatch room in the Sheriff’s Office.

At approximately 3:38 PM on Thursday January 31, 2019, while the trial in this matter was underway and the jury was seated in the jury box, Sheriff Ronald Krebs came into the dispatch room. While there, he viewed the 50-inch monitor showing multiple security cameras. Sheriff Krebs selected the courtroom camera to be viewed full screen. Then, either Sheriff Krebs or a dispatcher manipulated the PTZ feature of the camera as follows:

1. The camera was panned, tilted and zoomed to focus on the wood bar that is in the front of the jury box. It then was panned and tilted to show a juror’s closed Stenopad Notebook lying on the bar. The handwritten words “Jury #3” could clearly be read on the cover of the notebook. It then zoomed back out.

2. The camera was then panned, tilted, and zoomed onto the prosecutor’s table. According to one witness, the camera was moved along the table to type-written notes of the Prosecuting Attorney. The camera then zoomed out.

3. The camera was then panned, tilted, and zoomed onto the table occupied by Defendant and his attorney. This zooming was performed in three separate  motions. The camera was ultimately focused in the middle of the table where the defense attorney’s hand-written notes on a yellow legal pad were visible. The camera then returned to a normal, wide-angled view.

While these camera manipulations were occurring, Superior Court Judge Kathryn Loring and the Court Administrator, Jane Severin, were working together at Ms. Severin’s workstation. One of the remote security camera monitors mentioned earlier is next to Ms. Severin’s computer. Judge Loring and Ms. Severin noticed the camera movement. One of them selected the courtroom camera to be displayed full screen. They observed all three of these camera movements, starting from when the camera was focused on the wood bar in front of the jury box. They both saw the camera zoom into the defense attorney’s trial notes.

Judge Loring alerted Judge Donald Eaton who was presiding over the trial. Judge Eaton went to the Sheriff’s Office and viewed a recording of the video multiple times. The recording of the afternoon was placed on a USB drive (commonly called a thumb drive) to be kept by the court as an exhibit. This exhibit is the subject of the State’s sealing motion.

On the next morning, Friday February 1, 2019, with the jury out of the courtroom, Judge Eaton related what Judge Loring had told him and what he saw of the security camera footage. Later in the morning, it was learned that Sheriff Krebs had manipulated the camera. He was called to testify.

On the stand, Sheriff Krebs testified that, in the afternoon of January 31, he went to the dispatch room in part to check on the security cameras as he often does. He stated that he was familiar with the operation of the PTZ feature on the two outside cameras that have this feature, and had used the PTZ feature on prior occasions, but that he did not know until that afternoon that the District Court courtroom camera had the PTZ feature. He selected the courtroom camera to view full-screen with a click and then a double-click. He never explained why he double-clicked the display. He stated that the camera suddenly and accidentally zoomed in. This was when he realized that the camera had PTZ capability. The camera focused on what he recalled as hand-written notes. He “freaked” for a few seconds. He then zoomed the camera back out.

Judge Eaton asked specific questions to ascertain if Sheriff Krebs knew of the multiple camera manipulations that had occurred on and shortly after 3:38 PM:

JUDGE EATON: And the only thing it zoomed in on was Mr. Gaylord’s notes.

SHERIFF KREBS: It was one of their notes.

JUDGE EATON: Or just one set of notes.

JUDGE EATON: And it’s your testimony that you did not pan the camera intentionally . . .

JUDGE EATON: And did not see the camera pan around inside the courtroom while you were there.

JUDGE EATON: And did not, you did not tilt the camera while you were there . .

JUDGE EATON: And you did not see the camera tilt up or down while you were there.

JUDGE EATON: And you did not see the dispatcher manipulate the camera at all in terms of tilting, panning, or zooming.

JUDGE EATON: And then you left dispatch.

That day, Defendant moved to dismiss the case under CrRLJ 8.3(b) alleging governmental misconduct prejudicial to his right to a fair trial. The Court continued the proceedings until the morning on Saturday February 2 to hear the motion.

On Thursday January 30, 2019 [sic], while monitoring the security footage from the surveillance cameras, from the dispatch room I inadvertently manipulated the camera in the District Court courtroom in such a way that it zoomed in on one or more locations in the courtroom. This occurred while I was attempting to enlarge the screen of the district court courtroom so that I could get a larger view of the entire area. The enlargement was not intentional, nor did I view or intend to view any item or writing located in the district court courtroom.

(emphasis added) The declaration contains no further explanation and so does not explain the discrepancy with Sheriff Krebs’ earlier testimony that he only zoomed once, and does not explain how one could inadvertently zoom in on more than one location in the courtroom at different times.

That morning Saturday, February 2), Sheriff Krebs was again called to the stand to testify. This time, one day after his prior testimony and now two days after the incident, Sheriff Krebs admitted that he saw the camera move through all three camera movements:

PROSECUTOR RANDY GAYLORD: You were present in the dispatch office when the camera screen in the district courtroom was zoomed in on three different places?

In response to more questions from the prosecutor, Sheriff Krebs went on to testify about the details of what he saw of the juror’s notebook, the prosecutor’s notes, and the defense attorney’s notes.

Sheriff Krebs changed his testimony further in response to questions from Judge Eaton:

SHERIFF KREBS: At whatever time is on the video .

JUDGE EATON: When it was happening?

JUDGE EATON: So you were in the dispatch room long enough to see all of the various time that that camera zoomed in on these various things?

JUDGE EATON: And saw all of that?

Sheriff Krebs offered no explanation for his inconsistent testimony one and two days after the events in question.

The Court granted the motion to dismiss. In his oral ruling, Judge Eaton stated that, while viewing the video footage, he could read a date, a proper name, and a “helping verb” on the defense attorney’s notepad, but that he could not discern any meaning from what he could read.5 He could see but not read any of the other handwriting on the notepad. Nevertheless, not only did the judge find that the State had committed governmental misconduct, the judge found that the State had not met its burden to prove beyond a reasonable doubt that the misconduct caused no prejudice to Defendant’s right to a fair trial. In his oral ruling, Judge Eaton did not explain the reasonable doubt that he had and did not give examples of reasonably possible prejudice.

The State seeks to seal the video from the security camera. The State claims that public access to the footage will compromise San Juan County’s ability to secure the courthouse because the footage may disclose “weaknesses” in the camera system. Defendant has waived any rights he may have to redact at least the writing on his attorney’s notepad, and is not joining nor opposing the State’s motion to seal.

That the public has a compelling interest in this case is manifest. Beyond the typical criminal proceeding, this case involves (1) a dismissal due to governmental misconduct; (2) intentional misconduct that directly threatened the defendant’s right to a fair trial; (3) misconduct of such a nature that its discovery was pure happenstance; and (4) misconduct by the elected official charged with the security of this county. The public’s interest in these proceedings could not be higher. Because the video from the security camera was an exhibit to these proceedings and considered by the Court when deciding Defendant’s motion to dismiss, the public has a constitutionally-protected interest in the video. However, there are two reasons why this interest is particularly strong.

A. The nature of the Court’s ruling heightens the public’s interest in the security camera video.

The first reason arises out of the nature of the Court’s ruling with regard to the prejudice that the security camera’s image may have created. The Court stated that, while viewing the video recording of the security camera image, the Court could not ascertain any meaning from what the Court could read from the video. Nevertheless, the Court ruled that the State had not met its burden to prove the absence of prejudice to the Defendant beyond a reasonable doubt. Prejudice must go to Defendant’s right to a fair trial.

Yet, the Court did not articulate any basis for the reasonable doubt, apparently harbored by the Court, that there was no prejudice to Defendant’s fair trial right. The only compelling evidence available to the Court was the video and the testimony of Sheriff Krebs. The screenshots of the video, which were not sealed by the Court, would support a finding that the State has met its burden of eliminating reasonable doubt of prejudice.

However, the video itself contains more information in the form of the movements of the camera: the sequence, timing, and extent of those movements. Based on the what is presently available to the public, the camera’s movements appear to call into question the credibility of the testimony. While the Court did not comment strongly on the credibility of Sheriff Krebs, it is reasonable to believe that the Court’s credibility determination played a part in its analysis of reasonable doubt.

B.Sheriff Kreb’s misconduct heightens the public’s interest in the video even further.