On Thursday,  February 28, 2019, San Juan County Acting District Court Judge Don Eaton agreed with arguments put forth by the county's IT Director and Sheriff Krebs that releasing the security camera video without redactions would compromise courtroom security. The video shows the District Court security camera being manipulated and zooming in on defense attorney's papers, prosecutor's exhibit and a juror's notebook during a criminal trial on January 31, 2019. As a result of the manipulation, at least some of which was done by Sheriff Krebs, the case against Lopez Island resident Dustin Schibel was dismissed. The controls for the camera are in the Sheriff's Dispatch Office. 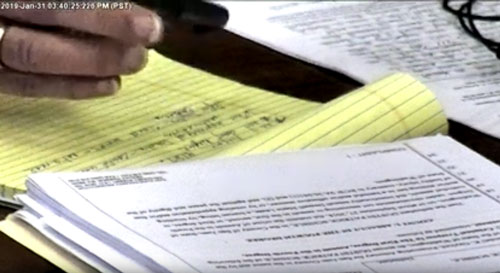 Still from fourth section of the video. Video posted at the end of this article.

Krebs' attorney Michael Kitson filed a brief on February 25, 2019  stating that the public's knowledge of the camera's "default position" would impair courtroom security. He argued that it would show what parts of the courtroom aren't covered by the camera. Kitson submitted four video files on a thumb drive which showed the four separate incidents of zooming in instead of one video showing all instances in context. The edited versions do not show the view before and after the zooming.

Judge Eaton agreed to keep the video that shows all four as one unit sealed. He will release the redacted version.

Defense Attorney Colleen Kenimond asked if the videos still showed the time they were recorded. Kitson said they did.

The fourth of four video clips released by San Juan County DIstrict Court, which is 24 seconds long and shows the camera zooming in and focusing on the defense attorney's notes,  is posted at the bottom of this page. The court released the videos in four separate sections Friday, March 1, 2019.

The zooming shown on the first of the four video clips was done by Dispatcher Nicholas Wainwright. He told Judge Eaton he was curious what was on the large piece of paper that was the Prosecutor's exhibit.