On Friday, March 1, 2019, San Juan County District Court released four clips  of video from the courtroom security camera that shows the zooming action that resulted in a criminal case being dismissed. The third section of video - a 24-second clip that shows zooming onto the Prosecutor's notebook - is posted at the end of this page. 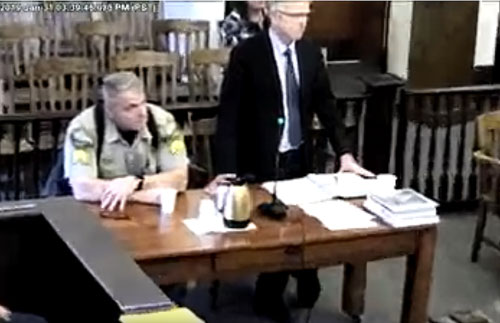 Still from third section of the video. The 24-second video is posted at the bottom of this page.

The controls for the camera are in the Sheriff's Dispatch Office. Sheriff Ron Krebs has admitted he did at least some of the zooming action. He claimed it was accidental as he tried to zoom out the camera. The entire section of footage that shows the camera zooming in and out was not released as one unit due to security concerns cited by Krebs' attorney and county IT staff. They thought security would be compromised if people could deduce blind spots after they saw what the default position of the camera revealed.

The zooming shown on the first of the four video clips was done by Dispatcher Nicholas Wainwright. He told Judge Eaton he was curious what was on the large piece of paper that was the Prosecutor's exhibit.