(Article updated to clarify difference between Carboxy-THC and THC.)

Almost exactly a year after an October 5, 2018 crash, the driver, a 24-year-old woman will be arraigned on one charge of Reckless Endangerment on October 2, 2019 in San Juan County District Court in Friday Harbor. Court is in session beginning at 9 a.m.

Asked why it took so long to charge the driver, San Juan County Prosecutor Randy Gaylord said his office was waiting on the toxicology report.

The report shows a presumptive positive for cannabinoids and a Carboxy-THC level of 11 ng/ml. Carboxy THC is not the same as THC. Carboxy THC is a chemical that stays in people’s systems for weeks after they’ve smoked marijuana but doesn’t affect impairment.

THC is a chemical compound that causes drivers to be impaired. Under Washington State Law a driver with a level of 5 nb/ml THC or more in a blood sample is considered impaired.

The report does not show any THC in the driver's blood.

The evidence, two vials of blood drawn from the driver, were received at the state lab on November 5, 2018. 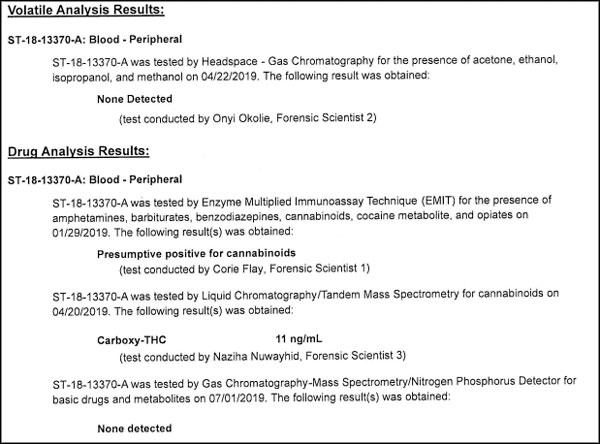 On January 29, 2019 a test conducted to determine the presence of amphetamines, barbiturates, benzodiazepines, cannabinoids, cocaine metabolite, and opiates. The result was "Presumptive positive for cannabinoids."

On April 20, 2019 a test for cannabinoids obtained the following result: Carboxy-THC 11 nb/ml.

On July 1, 2019 another test was conducted for detection of basic drugs and metabolites. None were detected.

On the day of the crash, a San Juan County Deputy believed there was probable cause to arrest a  San Juan Island woman for vehicular assault, hit and run unattended, hit and run attended after she hit three vehicles and a flagger and drove off on October 5, 2018 in Friday Harbor.

According to the Probable Cause Statement by the San Juan County deputy:

"On 10-05-2018 at approximately 0716 hours, I was dlspatched to the area of the 100 block of Níchols St for a report of a hit and run involving a flagger for road work being conducted in the intersectlon of Spring St and Argyle Ave.

"Dispatch advised me a flagger was hit and the vehicle took off and the driver is now being detained by several citizens.

"I arrived and went to where the driver was  being detained by citizens. I contacted [the accused] who was seated on the sidewalk. I also noticed a brown Dodge van displaying Washington State license plates BJE1358 parked across the street, partway on the sidewalk and pinned by a large tractor.  I asked [the accused] what had happened and she just stared at me.

"...I went up the street to the roundabout where Hebert was hlt and I learned that two other vehicles were hit in the lot of Carquest. I took photographs of the two other vehicles and spoke to other wítnesses. I learned the incident started in the parking lot located at 370 Spring St. [The accused] was parked, backed out hitting a silver Honda CRV, burned out her tires and proceeded to Spring St. where a white Dodge van was stopped for traffic. [The accused] hit the left rear corner of the white van and proceeded into the roundabout, disobeying Hebert's orders to stop, and hit her."

The deputy arrested the woman for Hit and Run. She was taken to the Sheriff's Office and after a search warrant was obtained, blood samples were drawn for toxicology tests.

Prosecutor Randy Gaylord said his office waited to receive the results of the toxicology tests before filing charges.

Hebert, the flagger, was unable to work for more than nine months after being hit. She returned to work part-time in August 2019. She is still dealing with the effects of being struck by the vehicle.

Note: San Juan Islander doesn't publish, except in rare cases,  the accused person's name until after they have been arraigned.

More in this category: « Woman charged with reckless endangerment after hitting flagger in 2018 in Friday Harbor