In an unanimous vote San Juan County Council agreed to send a letter to Secretary of Interior Ken Salazar asking him to ask President Barack Obama to sign a proclamation creating San Juan National Monument. This would permanently protect the 1,000 acres of Bureau of Land Management Land in San Juan County.

The effort to protect the land focused first on a designation as a National Conservation Area which requires an Act of Congress which could take years.

A National Monument designation requires only a presidential signature. The end result is the same.

The next step is a recommendation by Salazar to the president.

At a March 22, 2012 meeting in Anacortes, he said he would make the recommendation if there was community support which the council's letter indicates. The secretary's email address is exsec@ios.doi.gov.

During the same meeting Senator Maria Cantwell asked the audience how many wanted the land to remain protected and almost everyone raised their hands.

Two weeks ago, Council members Richard Fralick, Patty Miller and Rich Petersen didn't feel there had been enough public input on the possible designation. At today's (Tuesday, April 3, 2012) meeting, all prefaced announcing their decision to vote yes by saying they believed there now was plenty of notice to the public and plenty of comments.

On San Juan Island, two people spoke against the measure. The rest of the more than 20 speakers were for the NM designation. They countered some of the falsehoods being spread by opponents.

The facts are the designation will not interfere with fishing and boating. It is not a land grab, or another level of federal bureaucracy. The Land Bank or Preservation Trust cannot purchase the land. The land is in danger of being sold and without the designation no more resources would be provided. There will be local involvement in planning the management. The only BLM land which could possibly become part of the SJI National Historical Part would be Cattle Point Light. It would take at least one act of Congress and more than likely two to do so.

More information by the local committee on the designation project is posted here.

MAP of BLM Lands in SJC

What does NCA designation do?

NCA or National Monument? One will protect sooner

posted 02/29/2012 Almost every hand went up when Senator Maria Cantwell asked how many people want the Bureau of Land Management property in San Juan County protected. Agreement on how to accomplish that wasn't so conclusive.

Secretary of the Interior Ken Salazar and Cantwell held a town meeting in Anacortes Satuday, February 25 to listen to citizens' opinions about creating a National Conservation Area in the San Juan Islands. Scheduling conflicts made it impossible for the meeting to be held in the islands.

A NCA would protect the land in perpetuity. Without the NCA there is nothing to stop the federal government from selling any of the 1,000 acres of BLM land in San Juan County.

Mitchell Hill, 325 acres adjacent to English Camp, was on the verge of being sold to a private developer, before an Act of Congress championed by Cantwell, Representative Rick Larsen and Senator Patty Murray made it part of the San Juan Island National Historical Park.

In order for the BLM land to become a NCA, legislation must be approved by Congress. Both Larsen and Cantwell have introduced bills into the U.S. House and Senate, respectively. Cantwell told the audience at the meeting, it may happen next year or in ten years to pass, or never.

The other way to protect the land is by the stroke of a presidential pen. The Antiquities Act of 1906 grants the President authority to designate national monuments. 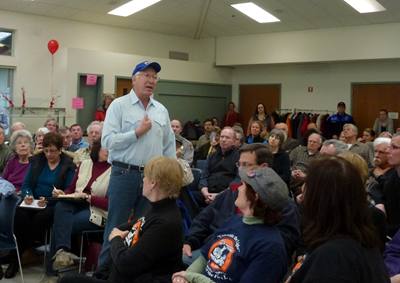 "This is not about the federal government coming in and buying a single acre of other land," said Salazar.

Some people did not want the federal government involved. One person said, "Let us run our islands, let us enjoy what we got."

Another said it felt like "some kind of stealth" deal.

One person said, "I'm not afraid you'll take us over. We are really glad this is happening.

Another said, "I feel this legislation is great, it puts it (protection) in writing."

The plan for management of the BLM lands through either of the two programs will be the result of a community-driven planning process.

Asked what advantages an NCA or Monument status would bring, Salazar replied more resources. Currently the only BLM employee working on the lands is "warrior" Nick Teague, who Salazar praised for the incredible job he's done. More information on websites, signage are possibilities. According to DOI staff, structures are not built.

At the end of the meeting, while almost everyone supported protecting the land, there wasn't a clear mandate for Salazar to ask President Obama to sign an executive order.

At the Tuesday, February 29 county Council meeting, Tom Cowan presented an update with a new twist on the process. The local committee is now gearing up to generate community support to make it possible to obtain National Monument status.

The twist is the status would be based on the language of the proposed NCA legislation.

Cowan said a three-member delegation, including Stephens, is traveling to Washington, D.C. to meet with Cantwell, Larsen and Dept. of Interior staff. He said they've been told the idea is workable.

Much of the BLM land is on Lopez - the area encompassing Chadwick Hill, Watmough Bay and Point Colville. Also BLM land are Iceberg Point and Cape St. Maries.

Patos Island and Little Patos are also BLM land as is Turn Point on Stuart Island. Both Patos and Turn Point's lighthouses have been restored.

On Henry Island, Kellet Bluff is BLM land. The rest of the holdings are tiny islands or large rocks.