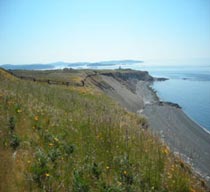 The $6.2 million project, targeted for completion by October 15, will relocate 1.27 miles of county road between Pickett’s Lane and the Cattle Point lighthouse to a glacial bench about 300 feet uphill from the current roadbed. The right of way will pass about 150 feet below the park’s Mount Finlayson trail overlooking the Strait of Juan de Fuca, Taylor said. About 500 feet of road within the park boundary is threatened by coastal erosion. If erosion continues unchecked the roadway will eventually fail, cutting-off the only access by road to federal, state, and private property, as well as utilities, at the east end of the Cattle Point peninsula.

Vehicular access to the Cattle Point/Cape San Juan area will be maintained throughout the project, though the speed limit will be reduced to 35 mph from Pickett’s Lane east to Cattle Point as mandated by the Environmental Impact Statement (EIS) authorizing the work, Wilbur said. Drivers can expect delays of up to 15 minutes​ during morning commute hours (6 to 8 a.m.) and 30 minutes from 8 a.m. to 6 p.m., Monday through Friday. The exceptions will be the Memorial Day and Labor Day holiday weekends when operations will cease from 6 p.m. Fridays to 7 a.m. Tuesdays. The road will open immediately for emergencies during construction.

The Jakle’s Lagoon/Mount Finlayson trail network will remain as is after the alignment and will be open throughout the construction process, Taylor said. The only change is that the 1.5-mile ridge line portion of the trail will be closer to the road. However, the sweeping views of the Strait of Juan de Fuca, the Olympics and North Cascades ranges and Mount Rainier (on occasion) will remain unobstructed.

“We realize there will be some disruption of daily life for islanders and some inconvenience for visitors,” Taylor said. “But the pay-off will be a safe, as well as scenic, right of way through the park that will ensure our neighbors continue to have unimpeded access to their homes and visitors will be able to enjoy public lands far into the future.”

In addition to a more secure driving experience, the project also will result in an upgrade of the utilities serving the southeast end of the island, Wilbur said.

Construction will commence with surveying and staking on April 13, and heavy equipment will arrive between April 15 and 17, according to the contractor, Strider Construction of Bellingham.

The realignment launch is the culmination of a process that required the cooperation of county, state and federal agencies dating to 2001. The Draft Environmental Impact Statement (DEIS) for the Cattle Point Road Project was released for public comment in August 2010. A public open house was held in October 2010 to discuss and take comments on the DEIS.

The FEIS, addressing those comments, was published in the Federal Register on October 10, 2012 and the two agencies signed Records of Decision (RODs) in April and May 2013, respectively. The realignment will prolong the life of the road by more than 70 years, Wilbur said. The FEIS can be viewed at San Juan County Public Works or online: www.wfl.fhwa.dot.gov/projects/wa/cattlepoint/

In June 2012, after several tries, San Juan County was successful in obtaining $5.5 million (out of a total $42 million awarded nationwide that year) for the project by the Federal Lands Access Program.

More in this category: « Share your stories about Your Park Light turned on 100 years ago at Lime Kiln Lighthouse, celebrate June 30 »