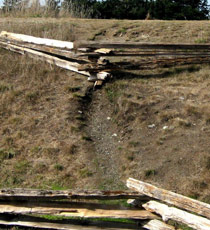 The social trail leading from the top of the redoubt rampart to a wayside exhibit below has been barricaded to halt erosion on the iconic structure, built by the U.S. Army from August through October 1859.

In an effort to check the degradation of Robert's Redoubt, San Juan Island National Historical Park staff have erected temporary barricades at two points on the south ramparts to redirect hikers bound for the seashore.

The most significant damage is a social trail (another word for short-cut) that hikers have carved in taking a more direct path to an exhibit wayside erected below the rampart in 2012. Wear also is notable at the far eastern end of the fortress where wooden stairs leading to the bluff trail were removed in 2011.

The eroded rampart at Robert's Redoubt at American Camp. The wayside depicts the height of the Pig War crisis of July-October 1859, illustrating the position of warships of both nations, as well as U.S. Army Capt. George E. Pickett's change of campsites as the crisis unfolded.

Plans are underway to move the wayside to a point below the southeast end of the redoubt. The exhibit will be mounted on a concrete base and positioned on a hardened surface that will accommodate the exhibit and viewers. The barricade nearest the present wayside position will remain, but hikers will able to walk to the eastern end of the redoubt and descend a hardened path to the wayside and the bluff trail beyond. 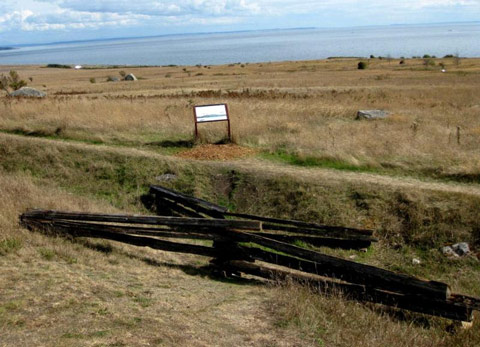 "This will provide the best of both worlds," said Mike Vouri, park historian. "It will protect the south rampart from further erosion and actually place the wayside in a better location to interpret, in panorama, the events associated with Pickett's landing."

Robert's Redoubt is possibly the park's most significant cultural resource of the crisis and joint occupation period, Vouri said. It is a classic example of a mid-19th century earthwork prescribed by instructors at the U.S. Military Academy at West Point.

"West Point was essentially an engineering school and the top graduates of each class, such as 2nd Lt. Henry M. Robert (builder of the redoubt), were posted to the engineering company stationed at the academy," Vouri said. "In fact, Robert's 10-man sapper team here was dispatched from that company, though their original purpose in Washington Territory was to engineer a portion of a Military Road that was to run from the 49th parallel to the Columbia River."

Most other earthworks of this period, particularly those erected east of the Mississippi River during the Civil War, have been degraded through community development, Vouri said.

"But San Juan Islanders--despite farming, road construction and other development--allowed this fort to stand as it did the day Robert's men left it to return to Fort Steilacoom," Vouri said.

To learn more about Robert's Redoubt, visit the park's web page at: http://www.nps.gov/sajh/learn/historyculture/the-redoubt.htm