In 1968-69 I was serving in a Special Forces camp in the Mekong Delta when I received a letter from my grandfather, who lived in Mount Vernon over on the mainland. In it he expressed excitement over San Juan Island National Historical Park, which had been created by act of Congress in June 1966 and was in the process of being developed by its first superintendent, Carl Stoddard. 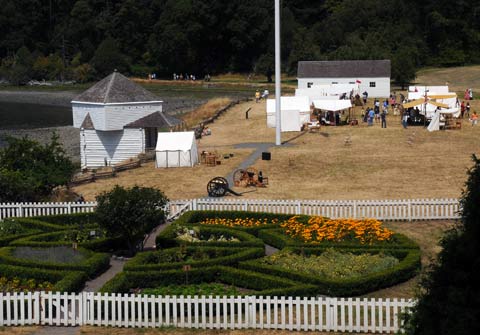 Encampment at English Camp in 2009

This June the park marked its 50th anniversary of expressing an idea that is unique among the National Park Service’s more than 400 units: the peaceful resolution of conflict through arbitration.

“You could get a job there when you come home from the war and get out of the service,” my grandfather wrote. “They are going to celebrate peace and I think, by then, you might have a thing or two to say about that.” I no longer have the letter, but it was something along those lines. But one thing I am certain of is that after a few months of being shot at and shelled San Juan Island sounded like heaven.

My grandfather’s suggestion miraculously came to pass when in 1995 I arrived on the island to be first a lead interpreter and eventually chief of interpretation for the park. I retired this past December following more than 21 years of writing and talking (preaching really) about peace over war. 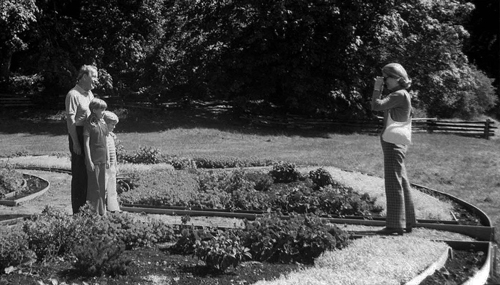 Scoop Jackson with family at the garden at English Camp

That was the hook Sen. Henry M. Jackson (D-Washington) used to create the park’s enabling legislation that was signed into law by Pres. Lyndon B. Johnson. That it happened during the major escalation period of the Vietnam War was ironic to say the least. But was there a better time to invent a park that celebrated the first peaceful arbitration between two nations in modern Western history?

As most islanders know, the park primarily interprets the Pig War of 1859, when the United States and Great Britain teetered on the brink of war over possession of the San Juan Islands, which lie between Vancouver Island, BC and the U.S. mainland. Following years of tension between settlers from both nations a crisis erupted when an American shot a pig belonging to the Hudson’s Bay Company. Opportunities for violence arose several times during the incident, but at each instance men of conviction showed restraint.

The one that stands out for me, in particular, was when, after U.S. Army Capt. George E. Pickett landed his troops on the island on July 27, British Gov. James Douglas responded by dispatching Capt. Geoffrey Phipps Hornby and HMS Tribune, a 31-gun steam frigate. Hornby was to order Pickett off the island. If Pickett did not comply, then Hornby was authorized to take “whatever measures necessary.” That undoubtedly meant shelling Pickett’s camp, which lay exposed on the beach just west of what we now call Old Town Lagoon on Griffin Bay, following up with a landing by Royal Marines and armed sailors.

After a brief parley with Pickett (during which the American politely refused) and an evaluation of the ground, Hornby concluded that an attack would be folly. First, he believed the Americans would scatter into the woods and possibly resort to guerilla warfare, and second he was not convinced that Pickett’s superior, Brig. Gen. William S. Harney, was acting on authority of his government (he was not). Hornby decided to stand fast and await the arrival from Chile of his superior officer, Rear Adm. R. Lambert Baynes, expected any day.

Hornby’s decision drew the wrath of Douglas, who later stated that if Hornby had followed his orders to the letter the crisis would not extended until late October with nearly 500 U.S. troops eventually encamped at Cattle Point and three British warships anchored in the bay. But Hornby, the son of a fleet admiral and former Pacific Station commander, knew that Royal Navy’s mission was to keep the peace on the high seas and ensure the free flow of commerce…not to start wars. When Admiral Baynes arrived a few days later he backed Hornby’s decision reportedly stating, “Tut, tut, no, no the damn fools.”

Baynes calmed the governor and the two men sent dispatches for direction to Washington and London. Six weeks later officials there from both nations responded by sending U.S. Army commander, Lt. Gen. Winfield Scott, a noted peacemaker as well as a warrior, to Washington Territory to negotiate a stand down. That the United States would dispatch a man who was 72 years old and in poor physical condition underscores the alarm that resounded in the halls of both governments.

It required less than week for Scott to temporarily remove Harney from command, size up the situation and with Douglas and Baynes negotiate a stand down after which the nations agreed to a joint military occupation of San Juan Island. The Americans would remain at Cattle Point while the British would establish their camp 13 miles north on Westcott Creek (now Garrison Bay). The joint occupation lasted 12 years and was peaceful throughout, the U.S. soldiers and Royal Marines finding more in common than not.

Kaiser Wilhelm I, who both nations agreed would serve as arbiter, selected a three-man commission who in 1872 decided in favor of the United States. The lands of both camps were claimed by Americans and ex-patriot Britons (who chose to remain on the island) under the Homestead Act and were farmed primarily until reacquired by the federal government to stitch together the parklands we enjoy today.

Beginning with Carl Stoddard and continuing through the years with scores of dedicated staff and volunteers the park has told the Pig War story. It has not always been easy. For one, budgets are tight and small parks such as San Juan have to compete with other small parks for an increasingly shrinking pie. For another, our nation has been almost continually at war over the last two decades. We tell the story and visitors shake their heads and say, “Yeah, tell that to the government.” And then there is the terrorism that wrought 9/11 and everything in its wake. What does arbitration have to do with that? All you can do in these cases is lower the flag to half-staff.

But you still go to work each morning, turn on the lights and flip the door sign to “Open.” You clean the bird poop off the interpretive panels scattered about the park and hope visitors will go away appreciating that something happened here that is worth knowing about; that individuals and nations CAN sometimes resolve their problems peacefully without resorting to violence. You have to believe that.

Indeed. It has been long journey from the rice paddies of the Mekong Delta, but a deeply satisfying one. My grandfather would be thrilled.

- By Mike Vouri,  former chief of interpretation of San Juan Island National Historical Park and the author of three books about the San Juan Boundary Dispute.