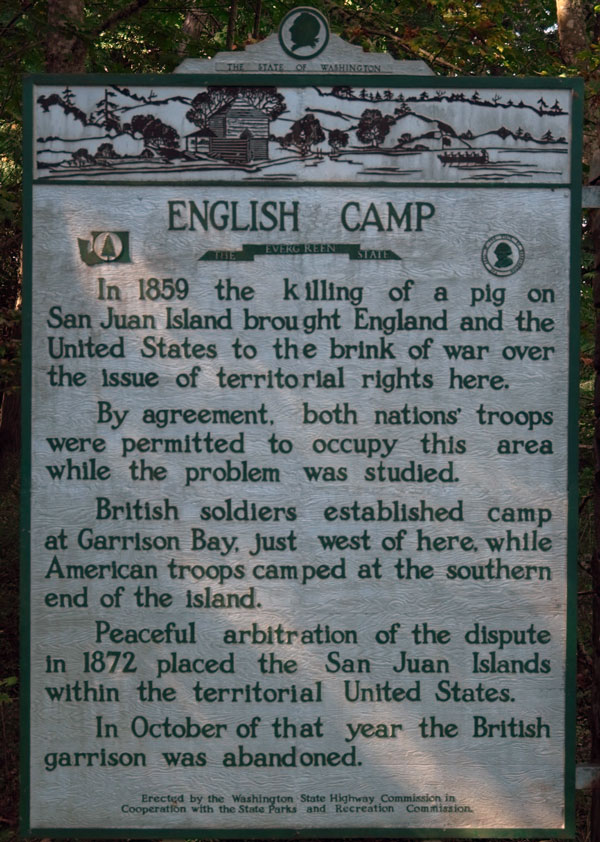 A series of special programs will be presented from August 22 – 25, 2019 to commemorate the 160th anniversary of the 1859 Boundary Crisis known as the “Pig War.”  The peaceful actions in response to the crisis ensured that no national battlefield need to exist and that diplomacy is always the best action forward. San Juan Island Historical Park staff and volunteers will present  activities at English Camp, American Camp and the San Juan Island Museum of Art.

EVENING TALK ABOUT GEORGE PICKETT by former park historian Mike Vouri at the Pickett House at American Camp. The program  about the famed leader  and his role in the crisis that brought the country to the brink of war begins at 6 pm. Thursday, August 22.

TOURS OF THE PICKETT HOUSE from 10 a.m. to 3 p.m. on Friday, August 23 and Sunday, August 25 at American Camp. This will be the first weekend for the house to be open following restoration efforts of the interior of the building re-establishing the historic look of the structure. Park staff and volunteers will be leading tours of the Pickett House.

ARTIST'S RECEPTION for  Artist-in-Residence, Linda Hyatt Cancel who created a full exhibition of work to commemorate the park and the 160th anniversary of the crisis. The reception runs from 2-4 pm Saturday, August 24 at the San Juan Islands Museum of Art on Spring Street in Friday Harbor. The admission fee is waived during this time.

MUSIC BY THE BAY CONCERT featuring Vocal Few takes place from 6:30 to 8 p.m. Saturday, August 24 at the English Camp Parade Grounds on San Juan Island. Throughout the join occupation of the island during Pig War, many concerts and community performances were frequent at English Camp. Vocal Few is a Seattle area based singer/songwriter, folk pop duo singing songs about travel, change, dreams, and heartache.