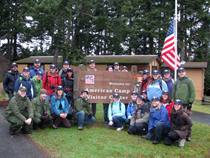 A University of Washington Student design team will present their initial research into designing a new visitor center at American Camp during a public meeting scheduled 6:30 to 8:30 p.m. Friday February 10, in the Mullis Center in Friday Harbor.

San Juan Island National Historical Park has been selected as a study site for a national design competition hosted by the National Park Service to explore the application of new design principles for the 21st Century. Twenty-one students compose the class from the University of Washington’s College Of Built Environments tasked to explore the park and seek opportunities to improve upon existing programs and facilities.

During Friday’s meeting, the students will share their data collected during a January site visit and through research of public documents concerning the park and larger San Juan Island community.

San Juan Islanders will be invited to ask questions and express their own visions of the park, now and into the future. Those who cannot attend the meeting are invited to send written comments by February 20 to San Juan island NHP, PO Box 429, Friday Harbor, WA 98250, Attn: Student Design Competition.

The UW team, led by Professors Ken Yocom and Manish Chalana, is among nine colleges and universities in December to conduct interdisciplinary studios with seven national parks on site-specific visitor center designs. Over the course of the spring 2012 semester, each studio will explore design solutions that broadly address the challenges facing the national park system today.

The competition, entitled "Parks for the People: A Studio Competition to Reimagining America’s National Parks," is sponsored by the National Parks Service and Van Allen Institute, is an independent nonprofit architectural organization, founded in 1894, whose mission is to pro­mote innovative thinking about the role of architecture and design in civic life.