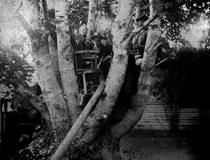 An era will come to end at San Juan Island National Historical Park’s English Camp unit when maintenance crews cut down the Bigleaf maple that has towered over the Royal Marine Barracks since it was first constructed in 1860.

The tree, scientific name Acer macrophyllum, has been in steady decline over the last three years, its brittle limbs already cabled together to protect the building, almost bare of leaves. Several limbs were removed in 2011, at which time it was noted that sucker shoots were appearing on the trunk, a sign that the tree was making a last-ditch effort to survive. It was pronounced dead by NPS arborists and scheduled for removal this year.

"This is not an action we undertake lightly, as this particular maple is nearly 300 years old and has cultural as well as natural significance," said park Superintendent Lee Taylor. “However, it is essential that we safeguard the Royal Marine barracks, and most importantly our staff and visitors."

The Bigleaf maples are among the many constants at English Camp — long before the former salt marsh and shell midden on Garrison Bay became so named. They were there when Indians were still gathering and shucking clams on the bay shore and the shells piled in drifts against the walls of their plank houses. They were there when the British Royal Marines arrived in March 1860 and when the Crook family established their homestead in 1875.

In fact, the maples have been there so long that the massive specimen located nearest the Formal Garden at one time was proclaimed the "World's largest Bigleaf maple." However, between 1969 and 1978, two major branches broke and crashed to the ground, thereby reducing the tree’s spread and removing it from contention as the world’s largest. The tree may still lay claim to being one of the world’s "oldest" Bigleaf maple."An increment bore/core sample was taken in 1966, and the tree pronounced to be 293 years old, which makes it 339 today. 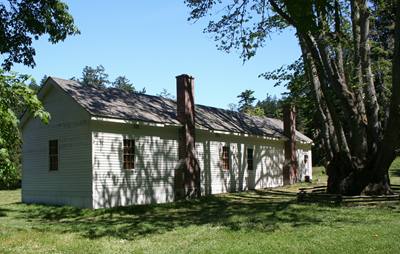 The maple next to the barracks is actually a cluster of several trees that have grown together over the centuries. It may not number among the biggest in the world, but this maple is certainly one of the most beloved on the island and has served as the background for many a photograph. One such photo shows the Crook family and friends posing in the massive trunk among the limbs that shoot up nearly 80 feet. Taylor said the park would like to commemorate the tree in some way. "We were thinking it might be fun if we could find carvers who could fashion crafts that could be sold in the site's gift shop area when it is open during the summer season," she said.

The heartwood is a light reddish-brown in color, fine-grained, moderately heavy, hard and strong. It will take a high polish and is known for grain patterns similar to Curly or Bird's Eye maple. Interested artists may contact Mike Vouri, the park's chief of interpretation at (360) 378-2240, extension 2227.

Bigleaf maples are found in coastal lowlands from just south of the Alaska Panhandle in British Columbia, through the western sections of Washington and Oregon. Further south in the warmer, drier California climate, it is located only in moist canyons at increasing elevations in the Coast Ranges and the Sierra Nevada range. It is most abundant west of the Cascade Divide from southern British Columbia to southern Oregon, from sea level to 3,000 feet (where it reaches its best development).

Mature specimens that have been growing in the open normally have squat trunks, 3 to 4 feet thick and support massive, spreading limbs. Examples range from 70 to 80 feet high and are nearly as broad. They live an average 200 years or more (as is the case with the English Camp trees). Located in forests among other varieties, Bigleafs will grow straight and tall, as high as 100 feet, with a loose crown of upward pointing branches, often forked or with several trunks close together.

Bigleaf maples are easy to recognize from other maples because of their giant leaves (8 to 12 inches across), with five deeply cut lobes. The lobes have smooth margins, except for a few large blunt teeth.

Leaf stalks are 6 to 12 inches long and unlike other maples, secrete a milky sap when broken. In late April and early May, while new leaves are opening, clusters of fragrant yellow blossoms (4 to 6 inches long) hang from the boughs. And all year round, thick moss and ferns cling to the rough trunk and lower limbs. 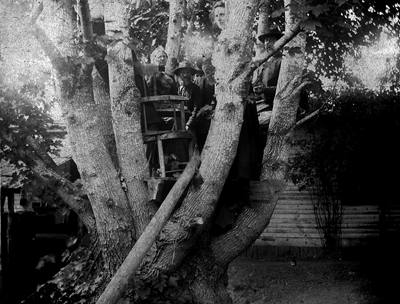 The William Crook family poses in the bigleaf maple tree adjoining the barracks at English Camp. It is presumed that the bearded patriarch at center is William Crook, an English immigrant house builder who settled on the site of the former Royal Marine camp in 1875 following a two-stop migration across the United States and its territories. His eldest daughter, Mary Crook Davis, is at right in the foreground, his son Jim barely visible at center. The tree has died, which will necessitate its removal this summer.